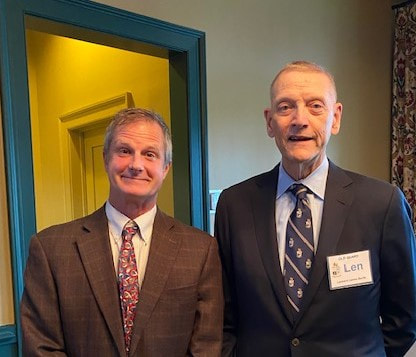 James Alexander Dun, Speaker and Len Berlik, Introducer
​Minutes of the Eight Meeting of the 81st Year
The meeting was called to order by John Cotton at the Springdale Country Club on October 26, 2022. He led the invocation. The minutes of the previous week were read by Katherine Trenner.

John Cotton announced that Springdale will be closed in January and February. Our winter program will begin on January 11, 2023, on Zoom, and we will resume meeting at Springdale in March.

A moment of silence was observed for the passing of Old Guard member Harold Borkan.

Len Berlik introduced our speaker, James Alexander Dun, Associate Dean of Princeton, whose subject was “Second Revolutions: Thomas Jefferson and the Making of the Haitian Revolution.”

Haiti was perceived quite differently in the late 1800s from the Haiti we think of today as a place of poverty, disease, and disorder. Saint-Domingue, as Haiti was known, was the most successful colony in the world. Producing large quantities of coffee and sugar, it was the center of Atlantic trade. Its wealth and centrality made it a noted cultural center as well, famously called the Pearl of the Antilles.

The plantations which produced Saint-Domingue’s wealth were on the cutting edge of 18th century capitalist development, a thoroughly modern colony, showcasing among other things agricultural and marketing innovations. The 500,000 slaves who produced that wealth of course had no part in its benefits.

The White colonists living in Saint-Domingue saw in the French Revolution possibilities for greater participation in government and less French control of their commerce. There were some who wanted complete independence, and there were some who sided with the monarchy. The gens de couleur, or people of color, had been free but restricted by white discrimination and prejudice. They hoped that the ideals of liberty, equality, and fraternity of the French Revolution would mean greater freedoms for themselves. Conflicts between these groups erupted into violence in 1790. British, then Spanish and then French forces invaded and fought for the colony. After much warfare, the colonists declared themselves free and independent in 1804.

Jefferson, first as secretary of state during the French Revolution, and then as president in the last stages of the Haitian Revolution, witnessed the world-changing events with two minds. A man of radical idealism regarding universal rights of man, he was simultaneously a man of his times who, as a white man, was unable to envision a society where whites and blacks lived equally together. Becoming president in 1800, Jefferson, and later historians looked at this period as a second American Revolution. Jefferson saw his efforts to promote the rights of the people and states’ rights as having won over Hamiltonian federalists and their perceived leanings toward monarchy.  Jefferson approved of the ideals of the French Revolution but not as they manifested themselves in the reality of the new Haiti. He continued to be troubled by slavery but felt slaves should be free only when their owners agreed and only when the freed slaves were removed from the white society in which they had lived. For instance, after Gabriel’s slave revolt in Virginia had been put down, Jefferson proposed that the conspirators be sent to Haiti where a Black citizenry had been established. He believed Haiti was an island made by nature to be a repository for freed slaves including those from America.

Napoleon Bonaparte’s attempt to reestablish French control, failed against the armies of Jean-Jacques Dessalines and Toussaint Louverture. Bonaparte had wanted to make the colony self-sufficient by relying on the French territory of Louisiana for its food supply. After the failed invasion Bonaparte gave up his plans for the Louisiana territory. When the Americans approached him with an offer to buy New Orleans, he was willing to sell the entire territory as well.

Dean Dun ended his remarks by noting that “of all the Atlantic revolutions, the Haitian revolution was the most transformative and radical by far.”