Sculpture on Many Fronts

J. Seward Johnson Jr.
Sculptor and Creator of the Johnson Atelier Foundry
​and Technical Institute
Minutes of the Seventh Meeting of the 69th Year
Meeting Opening President Bob Varrin called the meeting to order at the Friend Center at 10:15 a.m. Don Edwards led the invocation.
​
George Cody reviewed the talk given on Oct. 30 by Robert Austin, entitled "The Physics of Cancer." Bob Varrin reminded the members that the next meeting, to take place at the Friend Center, will start at 9:30 with a hospitality period. The meeting of Nov. 10 will be at Bolin Hall.

For all future meetings the wireless microphone will be used for members asking questions. If you wish to ask a question, please wait for the microphone to be delivered to you.

Talk Overview
J. Seward Johnson, Jr. Two Legacies
Seward Johnson is a sculptor whose figurative work is enjoyed worldwide in public venues, and is the founder of the Grounds for Sculpture (GFS) and the Johnson
Atelier Institute in Hamilton, N.J.
Over 200 sculptures are displayed at the GFS in both museum and outdoor settings. The facility is also a training center for artists from many countries in the technique of creating and casting sculpture.

The director of the Washington D.C Corcoran Gallery labeled Seward as "one of America's great citizens of the arts; his contribution to the art of our time is astonishing."

In his presentation Seward identified what he considers to be his two key legacies. The first is the creation of the GFS; the second is the placement of sculpture, readily accessible to the man on the street, in over 300 towns and cities worldwide.

At the GFS many dimensions have been melded together to provide a new art appreciation experience. The representational and abstract sculptures are surrounded by landscaping (12,000 trees), concerts are often presented, cafes are available, and peacocks wander the grounds adding an element of elegance as they spread their plumage. Seward states that this has been designed to "bring all forms of art together to expand and merge sensibilities." The main gallery is a large structure which was originally an exhibition space a: the Trenton Fairgrounds many years ago. Other buildings house less formal gallenes, a bookstore, artists working studios and a complete foundry for pouring molten casting metals.

While many artists and styles are represented, Seward includes his own figurative work. Favorites among visitors at the GFS are Seward's three-dimensional renderings of paintings of the French impressionists. Manet's painting of a picnic is rendered with the figures, cast off clothing, and picnic basket cast in bronze. It is set in a glade by a pond. The trees surrounding the scene and the wood boat on the pond are set exactly as they appear in the painting.
A very ambitious piece is modeled after Renoir's painting "The Boating Party." There are numerous figures, which took more than two years to complete. Within his perspective of always presenting something new, Seward has added an intriguing and humorous touch. Off to the side of the French partying group is a table occupied by Seward, contemporary artist Red Grooms, and various staff of the Atelier. A French waiter is the interlocutor between the period French people and the contempory party crashers. An interesting example of Seward's effort to bring the observer and sculptures together is a scene in the GFS garden cafe.

A French waiter serves diners cast in bronze seated at several tables. Observers may join the French diners at their tables. The bronze figures, clearly enjoying themselves, meld into the human group.

GFS is also a teaching organization. Over 120 artisans and apprentices from 57 countries have worked and studied at the Atelier.

Seward's second legacy has been to "bring sculpture to the man on the street who may not have the time or inclination to visit a museum." Six shows are mounted simultaneously throughout the country. A number of towns and cities have purchased works for permanent installation.The painted bronze sculptures scattered along sidewalks in the center of town liven the atmosphere of the area. Examples of such pieces are a father teaching his daughter to ride a bike, and the newspaper reader in Princeton. An interesting element of the newspaper reader is a bronze casting of the front page of a newspaper announcing the resignation of president Nixon. After the Watergate incident Johnson regretted having made a contribution to the Nixon campaign, and gained some satisfaction by casting the announcement the in bronze.
Seward has observed people pointing at his sculptures, holding their heads in wonderment, leaning against them, and even sleeping on them. He has formalized scenes by including such action as part of the sculpture. He often treats the observer and the original construction on a different scale; a small girl may be pointing to a 20 ft high bronze figure.

After some conversation with an uncle, Seward decided to forgo involvement in the family business and launch the Atelier with his own resources. His father had funded foundations managed by his other children, but did not contribute to Seward's effort. Over time his father began to appreciate that the Atelier was having more impact on society than any of the other organizations, and at far less investment. His confidence grew in Seward to the point where he turned over the financial investments of his trust to him. Seward described a scene where, equipped with a headset, he traded in options and stocks, at the same time working on a sculpture.

Seward sculpted a businessman with an open briefcase sitting on a bench in Liberty Park near the Trade Center. After the Towers fell the piece was essentially undamaged but covered with debris and ash. Rescue workers and volunteers covered the piece with flowers, notes, pictures, a fire hose and hard hats. Many photos were printed of the sculpture, and it assumed an iconic status. Seward saw the significance of making the festooned sculpture permanent He lugged it back to Princeton and cast the entire assembly in bronze. It lives on as a testament to those who lost lives, and to the rescue workers who toiled, at the Trade Center. 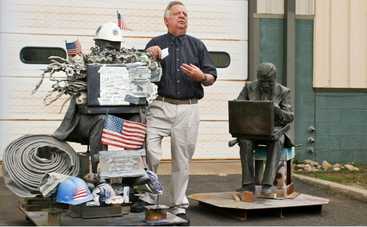