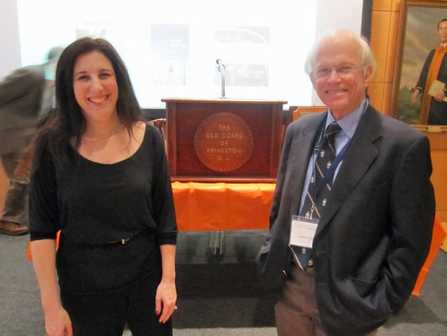 Pam Belluck, Speaker, and Landon Jones, Introducer
Minutes of the Eighth Meeting of the 73rd Year
President Own Leach called to order the 8th meeting of the 73rd year of the Old Guard of Princeton at 10:15 in the Friend Center. 112 members were in attendance.  Julie Clark led the invocation.  John Riganati read the minutes of the October 22 meeting.

President Leach reminded members to pay their dues.  He announced the next meeting will held on November 5.  The speaker will be Brandice Canes-Wrone.  The topic will be “First Look Back At Yesterday’s Elections.”

Landon Jones introduced Pam Belluck. Ms. Belluck is a 1985 graduate of Princeton University. She has been working for the New York Times since 1995 and is presently a Health and Science writer.  This semester she is a visiting professor of journalism at the Woodrow Wilson School.

When Ms. Belluck joined the Health and Science Department of the New York Times, she expressed interest in researching the current status of Alzheimer’s Disease. She became aware of the largest extended family in the world with Alzheimer’s Disease. This family, located in the northwestern region of Columbia, has in excess of 5000 members with this condition. This family has a genetic form of Alzheimer’s Disease that becomes symptomatic at a very early age, usually in the mid 40’s. In these isolated villages there have been an extensive amount of intermarriage that has resulted in approximately 33% of the family members developing Alzheimer’s Disease. A Columbian neurologist has been following this clan for 30 years. He realized that this environment would be a perfect setting to try different therapies because of the common genetic cause. Previous therapies have been unsuccessful, possibly due to attempted treatment only after diagnosis. Ms. Belluck reported that markers of the disease can be found in the cerebral spinal fluid of individuals 15 years before clinical onset. Recently new studies have been funded through the National Alzheimer’s  Disease program to begin therapy 15 years before clinical symptoms appears.  It will take many years before results of the study become evident.

Ms. Belluck also did a series of stories on how societies handle patients with Alzheimer’s Disease.  She wrote an article about South Korea’s “War on Dementia.”  South Korea has a large aging population. To combat an increasingly large demented population, children are being trained as dementia supporters helping out in nursing homes and in society. There are dementia experience centers where pre-teens are put into environments that would simulate what it would be like to be demented.

Another report described the problem in California’s maximal security prisons. This aging population develops Alzheimer’s Disease 10 years earlier than the general population likely to predisposing factors such as drug abuse and head trauma. Inmates have been trained to take care of the demented patients. Similar programs are now being instituted in other states. Many of these prisoners could be safely paroled, but nursing homes do not want them and the prisoner’s families feel they are getting better care in the prisons than they could provide at home.

Ms. Belluck wrote an article on the current front line therapy which centers around care giving not medications. One of the common major problems besides dementia is aggressive behavior and anxiety which can predate the onset of memory loss. Patients are medicated for these issues with antipsychotic and anti anxiety medications which results in a diminished quality of life.  At a Phoenix nursing home a new protocol was instituted. The staff became more malleable to patients’ desires allowing them to choose to do simple tasks whenever they wanted, such as showering at 2AM.  This was shown to make the individuals happier and decreased undesirable behavior.

Ms. Belluck briefly discussed the interaction of science and people in patients with Alzheimer’s Disease. This included stressing the ethical issues related to the increasing ability of early prediction of Alzheimer’s Disease in individuals with genetic markers. Another possible emerging way to predict subsequent development of dementia may be to measure the level of a protein that is in fetuses and in the normal aging brain but in decreased levels in patients with dementia.

Ms. Belluck stressed that there are huge unknowns in this disorder.  Innumerable studies have been published with contradicting results. The New York Times is very careful about which studies it chooses to publish. The most recent article written by Ms. Belluck relates a particular antioxidant in chocolate and possible benefit in decreasing memory loss. She planned to go to Thomas Sweet for some chocolate after the lecture!