The Ethics of Procreation: Explaining Why Creating Someone Is Sometimes Wrong 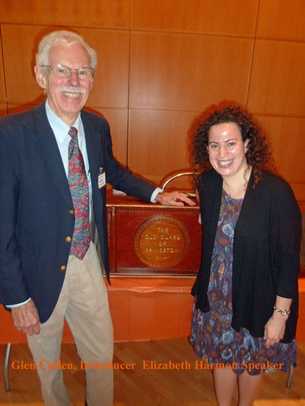 Prior Minutes:  Arky Vaughn read the minutes and presented his report of the remarks of the speaker at the September 19th meeting [“Flocks and “Fleets:  Collective Motion in Nature and Robotics” presented by Naomi E. Leonard, Edwin S. Wilsey Professor of Mechanical & Aerospace Engineering, Princeton University].

Speaker Introduction:  Glenn Cullen introduced our speaker, Professor Elizabeth Harman, Associate Professor of Philosophy at Princeton University’s Center for Human Values.  Professor Harman holds an AB in Philosophy from Harvard and a PhD from the Massachusetts Institute of Technology.  Following three years in New York University’s Philosophy Department, she joined the Princeton faculty in 2006, with a joint appointment in the Department of Philosophy, where she was named an Associate Professor in 2010.  Professor Harman has published widely, in the areas of metaphysics, epistemology and political philosophy, but her area of specialization is ethics.

Lecture:  Professor Harmon began her talk “The Ethics of Procreation:  Explaining Why Creating Someone is Sometimes Wrong” by stating that philosophy is about disagreements, which she framed as a series of “puzzles.” She constructed these “puzzles” as vehicles for thinking about what constitutes ethical behavior in the context of trade-offs.
She stated two goals for her talk to us:
1)  “to solve the non-identity problem by relying on reasons against harm;” and
2) “to vindicate the presence and explanatory value of reasons against harm in cases that generate the non-identity problem.”

Let’s begin with two of the puzzles she terms “non-identity cases”, which she defines as cases where one’s actions or creations affect whether someone exists.

Professor Harman showcases the non-identity problem in her radioactive waste policy and temporary condition cases. The first case weighs the alternatives of a permissive disposal method less onerous and less expensive to present generations, against one more harmful to future generations.
Her second case involves consideration of when to procreate, given a temporary health condition that will shortly resolve (in Alternative A:  the woman’s child will be blind if conceived before the temporary condition resolves; in Alternative B, she will avoid the likelihood of bearing a blind child, if she defers pregnancy until the condition resolves).

In the radioactive waste and temporary condition cases, Professor Harman presents an alternative that makes the world “impersonally” better off, but not better for any particular person:  a safer, healthier disposal method in the first case, and a non-blind child in the second.

However, she has two problems with the impersonal explanation. I quote:  “. . . it’s just not, in general, true that we’re morally obligated to bring about the best possible world.” . . . “Morality is simply not that demanding.” . . . “Being morally good is not required.” . . . “The impersonal explanation fails, because it underplays the seriousness of what’s at stake.”  She firmly rejects a consequentialist approach, dismissing a general requirement to do good as “superogatory.”

The second ground on which she rejects the impersonal explanation is that though we may have reasons to make the world better, “they are comparatively weak,” compared to “the more urgent reasons not to harm.” Her talk did not include how she arrived at this conclusion, or provide supporting evidence as to why she finds this true.

Her next puzzles, which she said are not non-identity cases, dealt with the retrospective framing of painful experiences with inadvertently positive accompanying outcomes:  a brutal concentration camp internment that influenced the victim’s character development and a traumatic rape that led, in consequence, to a happy parent-child relationship.  In these cases, she finds an inadvertent benefit inadequate to justify harm.

She also considered a painful surgery case that prevented a ruptured appendix and death, and concluded the surgery was a justifiable harm because it prevented greater harm.
In the interests of time, let’s turn to Professor Harman’s conclusions, some of which come from the Q & A following her talk:
Adjournment:  President Miller adjourned the meeting at 11:30 a.m.