A History of Impeachment, the Constitutional Remedy of Last Resort
​
​Alan Baron
Former Special Impeachment Counsel, US House of Representatives 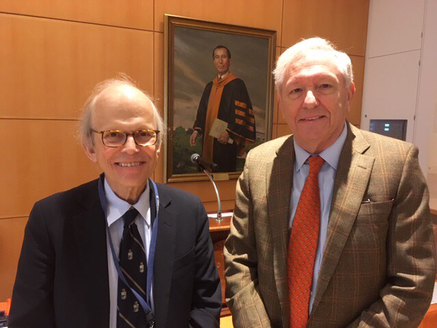 Minutes of the Fourth Meeting of the 77th Year

Landon Davis introduced Alan I. Baron, a Princeton (1963) and Harvard Law graduate. He was an Assistant U.S. Attorney for Maryland before going into private practice. Over the last 20 years he was special impeachment counsel for the U.S. House of Representatives on four different occasions. He was also an on-air expert for NBC during the impeachment hearings of President Clinton.

Alan Baron started his presentation with the year 1386, when the English Parliament impeached the Earl of Suffolk, who was charged with having committed “high crimes and misdemeanors.” That was the first time in history in which that phrase appears. Six hundred twenty-four years later, a U.S. District Judge was convicted of having committed “high crimes and misdemeanors.”

The history of those 624 years was broken into two era: in England and the period from the writing of the U.S. Constitution until today.

The first period started in 1386 and ended in 1489 when the English monarchy became so strong that the great state trials took place in Star Chamber proceedings. Impeachments started again in 1621 and lasted until around 1805.

During both impeachment eras, anyone could be impeached, even a private person, with the exception of the monarch.  It was a criminal proceeding, and, as a result, one might lose his freedom as well as his job. The act for which one was impeached did not have to be indictable as a crime. On occasion, impeachments would be brought and no trials were held. They were a warning.

Alan Baron then turned to the United States in 1786, during the time of the drafting of the U.S. Constitution. Nine of the 55 members of the Convention had studied in the Inns of Court in England and were familiar with English impeachment. The concern among the drafters was that, because there would a single, rather than a plural executive, the president, the drafters were creating a potentially more dangerous head of state than the British monarch.

The impeachment clause went from being solely for treason and bribery to offenses and maladministration. That last term was found to be too vague so “other high crimes and misdemeanors” replaced it.

While the impeachment clause used the same description as in England, it was fundamentally changed. No impeachments would lie against private individuals. The only penalty would be the removal from office, with possibly being barred from holding a future position of honor, trust, or profit under the laws of the United States. It was not a criminal proceeding but rather a remedial one.

The last point was demonstrated in the 1803 impeachment of a U.S. District Judge, John Pickering. Pickering had not committed a crime but nevertheless was convicted and removed for having committed high crimes and misdemeanors. This is because the word “misdemeanors” does not mean a minor criminal offense as it is commonly used today. Rather, it is the combination of two words, “mis,” meaning bad, and “demeanor,” meaning behavior. Thus, bad behavior is the offense.

The 2010 impeachment and conviction of G. Thomas Porteous, a U.S. District Court Judge in Louisiana, is in some ways more interesting, because it may have serious implications for the nature and scope of what now constitutes impeachable conduct. The criminal behavior that was the basis for the articles of impeachment, and for which he was convicted, occurred before Porteous became a judge. Alan Baron acted as Special Impeachment Counsel during this impeachment. Witnesses, including constitutional scholars, testified that there was no basis in policy not to consider pre-federal bench conduct as grounds for impeachment. For the first time in American history, a federal official was impeached for conduct he engaged in before he assumed a federal office.

Does this apply to the president? Scholars have argued on both sides but the Porteous case stands for the proposition that he/she can be impeached. As brought out during the Q&A, such prior acts would mostly likely have to have been unknown at the time of confirmation; otherwise it could be argued that the confirmation was an acceptance that such known behavior was already taken into account.

Alan Baron addressed two additional questions. Can a president be prosecuted while still in office? He believes that he can be, however, there are enormous practical considerations. The criminal process could go on for years. Meanwhile the president is not incapacitated per the 25thamendment; he is just otherwise engaged in his defense.  Far better, says Baron, to impeach and remove the president and then, if circumstances warrant, proceed with a criminal trial. The defendant is then no longer president.