Space Travel and 3D Sound:
My Hobbies Since I Was 12 and
How Princeton Pays Me to Keep Playing 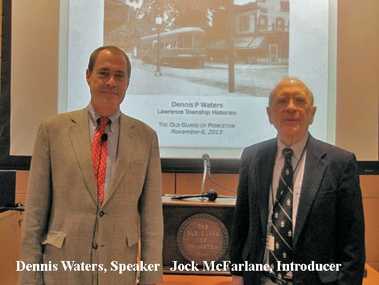 Minutes of the Eighth Meeting of the 72nd Year
The meeting in the Friend Center was called to order at 10:15 a.m. by President Ruth Miller. The invocation was led by Joan Fleming. Jock McFarlane read the minutes of the meeting held on October 23rd. There were 94 members present.

Ed Weiss, Chair of the Membership Committee, the proposed the following 10 candidates for election to membership:

The proposal was seconded and unanimously approved by the members.

Scott McVay introduced the speaker, Professor Edgar Choueiri, who was born in Lebanon and after attending Syracuse and Pisa Universities he received a PHD from Princeton in 1991 in Aerospace Engineering/Plasma Science.  He is a Professor of applied physics and aerospace engineering at Princeton University, where he is also Director of the Electric Propulsion and Plasma Dynamics Laboratory and Director of Princeton's Engineering Physics Program. He is also the director of Princeton's 3D Audio and Applied Acoustics (3D3A) Lab.

Professor Choueiri's talk was based on describing how he translated his boyhood interests in three areas into a professional career in which he still works in those areas. He listed three toys which he had as a boy of 12: A Telescope, A Water Rocket and A Tape Recorder