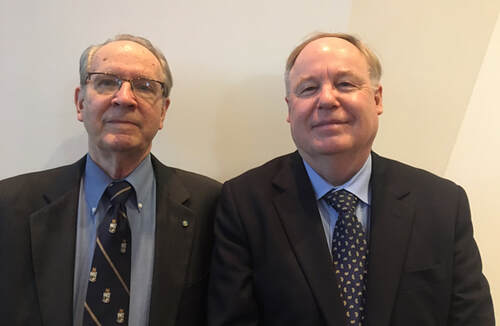 Minutes of the Eighth Meeting of the 78th Year

President Julia Coale called to order the eighth meeting in the 78th year of the Old Guard of Princeton at 10:15 AM, with 112 in attendance. After Joan Fleming led the invocation, Anne Seltzer read the minutes of the previous meeting. Guests were then introduced: Karen Morse and Ed Metcalf, by Rob Fraser; and Mary Wisnofsky, by Ann Vehslage.

Greg Dobbs, Membership Chair, reminded members that there are forms at the front of the room for members to update their contact information, as necessary. Greg then proceeded to present the slate candidates for Old Guard Membership. He conducted an election and all nine candidates (Ruth N. Bronzan, Alice Chandler, Robert F. Coughlin, W. Graham Cole, Alix Gerry, Richard Hankinson, Marsha Levin-Rojer, Sarah Ringer, and Carol Wehrheim) were approved without exception, their memberships to commence November 6, 2019.

Julia Coale announced that there will be a meeting of the Executive Committee next Wednesday, November 6, at 1:45 PM, at the Nassau Club. The next meeting of The Old Guard is also next Wednesday, November 6 at the Friend Center. Our speaker will be Jim Wickenden, President, Wickenden Associates, and former Dean of Admission at Princeton University. His topic will be "Admissions at Selective Universities: Reflections & Predictions."

William Storrar was appointed Director of The Center of Theological Inquiry (CTI) in 2005. Prior to his appointment he held the Chair of Christian Ethics and Practical Theology at the University of Edinburgh, where he directed the Centre for Theology and Public Issues. He is also a visiting professor of the University of Stellenbosch in South Africa and a Magnusson Fellow at the Glasgow Caledonian University in his native Scotland. In the U.S. he is an elected member of the American Theological Society and is a trustee at the Morven Museum here in Princeton.

Mr. Storrar began his presentation by describing CTI as a hidden gem in that many people are neither aware of its location nor its mission. He pointed out that CTI is neither a part of Princeton Theological Seminary nor Princeton University. Rather it is an independent institution for interdisciplinary research in Princeton, NJ. It was founded in 1978 as a nonprofit corporation of the State of New Jersey. It is governed by a Board of Trustees and advised by an Academic Panel of eminent scholars and scientists. CTI annually invites theologians and researchers in the humanities and sciences to apply for membership in its research workshops on global concerns.

He respectfully acknowledged the founding role of James McCord in the origin of CTI. McCord was an educator, Presbyterian clergyman, and ecumenist from TX. After a distinguished career he became president of Princeton Seminary in 1959 and held this position until 1983. During his tenure, the student body, the faculty and the Seminary’s campus significantly increased in size. The Center of Theological Inquiry was also established under his administration, designed as an independent institution of theological scholarship modeled on the Institute of Advanced Study. Upon retirement from the presidency in 1983, he became chancellor of the Center until 1989.

McCord’s efforts were driven by two key trends he identified. First, the emergence of continuing education beyond a primary degree led him to start the Center for Continuing Education. And then, the beginning of advance study research led to the establishment of CTI that exists today. McCord was skilled at reaching scholars worldwide as well as leaders within the U.S. in developing his center. He stated “The Center of Theological Inquiry has been designed in every aspect to be an environment conducive to fresh thinking on the problems of the religion and society.”

Among the primary benefactors and founders of CTI, Mr. Storrar cited William Scheide, Robert Meyner, David Lilienthal, Henry Luce III, and John Templeton. He proceeded to describe the CTI Mission:
The challenge is to develop conversational dialogue that goes beyond individual disciplines. CTI tries to create an environment to stimulate fresh thinking. As such, this group of resident scholars and theologians (up to a dozen members) come to residency and meet in a boardroom setting without the distraction of cell phones, the internet, etc., to share their knowledge and perspectives.

In a more detailed look at the way CTI operates, Mr. Storrar drew a number of comparisons. He contrasted research to achieve a goal or prescribed conclusion with inquiry as an open ended search in which the scholars and theologians go where the learning takes them to identify roles of theology in the problems of society. He contrasted conversations among scholars with the development of a deeper relationship, forged at CTI, that calls for reexamination of fundamental conclusions and the establishment of a new culture of communication and research.

He cited a number of distinguished scholars (representing economics, religious denominations, sociology, and theology, from around the world) who have participated in previous CTI inquiries. In particular, he highlighted his fellow Scotsman, Sir Angus Deaton, who visited CTI to discuss his work in poverty, health, and inequality. He also spoke of the contributions of United Kingdom Rabbi Jonathan Sacks who spoke to CTI on religion and violence.

Having outlined the origin, mission, membership and methodology of CTI, he moved on to what is the product.  He referred to recent studies on religion and violence, religion and economic inequality, and artificial intelligence, as examples where CTI produced positions on these issues. He cited communication of CTI findings as a key element. In particular, there are CTI’s frequent podcasts, Theology Matters, their newsletter, Fresh Thinking, and their frequent lecture series. In his conclusion he spoke of the December 5, 2019, presentation of "Mandela’s Dream: Democracy in South Africa 25 Years On," which is open to the public.