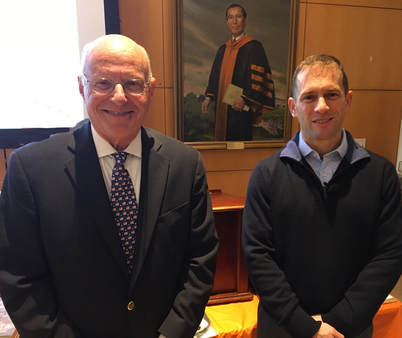 Minutes of the Eighth Meeting of the 77th Year

​On October 31, President Julia Coale called to order the eighth meeting of the 77th year of the Old Guard. Julie Denny led the invocation. Attendance was 126. Ruth Miller presented the minutes from the October 25th meeting, on behalf of Ferris Olin. There was a moment of silence in memory of two recently deceased members, Charlie Stenard and Henry King. The Chair of the Membership Committee Bob Altman conducted the election of eight new members, all of whom were elected unanimously: Ann Damsgaard, John Davidson, Julianne Elward-Berry, Robert Good, Jill Hespos, Andrew Littauer, Edward Rosenblum, and Fong Wei. There was one guest: John Kelsey hosted Colin Watts.

Professor Shapiro is the codirector of a project named Empirical Studies in Conflict, which for more than a decade has analyzed data for more than a dozen conflicts around the world. These are “Small Wars” and “Asymmetric Conflicts” – in contrast to big wars like World War II, in which the opposing combatants were more equally matched. These “small wars” have been fought in countries such as Afghanistan, Iraq, Pakistan, Philippines, Colombia, Liberia, Somalia, and Uganda. In a typical example, the rebels are attacking the government, which is attempting to suppress the rebels via counterinsurgency. Both sides need the support of the civilian population, without which victory is not sustainable. The book attempts to understand what strategies have worked and what have not, and why.

Professor Shapiro described several examples of big data used in the analysis of small wars. “Big data” is a term of art that doesn’t simply mean a huge amount of data. What it means is the combination of massive amounts of data with powerful database and graphic software which can provide insights that had previously been impossible. Such software has been available for only three or four decades. Big data is how Google can provide quicker and more accurate information about the geographic spread of flu outbreaks than can the Centers for Disease Control and Prevention – by tracking the geographic spread over time of Google searches for phrases like “flu symptoms” and “flu remedies.”

Professor Shapiro began his data presentation with two observations, illustrated by graphic summaries of some of the data: He showed a full page of graphs for Iraq of military incidents over time in each of 24 different regions; you can quickly eyeball the similarities and differences. There were similar sets of 24 graphs for Afghanistan, for Pakistan, and for the Philippines.

He then told a story to motivate his model. A villager is awakened at night by rebels planting an explosive device that was intended to kill government forces the next day.  He described the villager’s decision about whether to warn the government forces and the incentives to provide or withhold that intelligence.

The book’s analytic model of small wars is based on game theory.  This provides a strategic framework for analyzing contests between small numbers of participants, involving competition or cooperation or both, with perfect or imperfect information held by some or all participants. This framework was pioneered in the 1944 book Theory of Games and Economic Behavior, written by Princeton professors John Von Neumann and Oskar Morgenstern, also published by our next-door neighbor, Princeton University Press (my copy from Morgenstern’s course 50 years ago – you could guess it’s an old copy because the pages are yellowing, and the book price was $3). It has 600 pages, mostly of mathematics newly created by Von Neumann. This is the most influential book that Princeton University Press has ever published in the social sciences, perhaps in any field, and perhaps by any university press. Game theory has been essential to a dozen Nobel Prize awards in economics.

Professor Shapiro’s book uses an information-centric model of small wars, as a three-sided conflict between the government, the rebels, and the civilian population. Both the government and the rebels need information and intelligence from the civilian population to advance their objectives. The authors use their model to generate several testable propositions about what might work to reduce violence.

Let me jump to three of the book’s conclusions:
Overall, this is an impressive effort in collecting and organizing data that has been declassified, and in utilizing a sophisticated model of conflict. Of course, there remain substantial challenges for such analyses–think only about the conflict in Afghanistan, which is nearly two decades old.

People of our generation are skeptical of using data and models in conflict analysis–that they won’t guarantee the outcome that we hope. Our experience with data goes back 50 years to Vietnam, with enemy body counts told to us by President Johnson, Defense Secretary McNamara, and General Westmoreland. The US government had a simple model of when we might expect a turning point in the conflict–when we were killing more of them than they could replace.

In one way, today does feel like 1967. Then we had a president (LBJ) who would lie to us when it suited his purposes, and he would tell us not to believe what we could read in the New York Times.  But on the positive side, Shapiro’s work could not have been done publicly on this campus 50 years ago–you can read about the campus protests then, against the Institute for Defense Analyses. These authors would be been denounced for collaborating with the war machine. But now they can do this work publicly and have it published by Princeton University Press. That is progress.