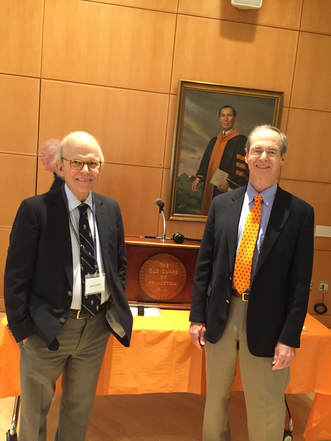 Landon Jones and Paul A. Hanle

Minutes of the Fourth Meeting of the 76th Year

Dr. Hanle is president and chief executive of Climate Central, an independent, nonpartisan organization of scientists and journalists who research, report on  and interpret the impact of climate change.

He is a physics graduate of Princeton and received his Master of Science and doctorate from Yale. Before his election to his present position in 2011, he held numerous leadership positions in science-related institutions.

The main points made by Dr. Hanle were:
2. Carbon dioxide levels have been growing since the industrial
revolution and are now far above historical levels.
3. A great majority of scientists agree that global warming is caused by the increase           in human-generated carbon dioxide levels.
4. Risk of extreme weather events has been increased by climate change.

The speaker presented extensive evidence for global warming. For example the 10 hottest years on record have all occurred since 1998. Sea levels are rising – about a foot since 1880, caused by melting ice sheets and retreating glaciers.

Correlated with global warming has been the measured, systematic increase in carbon dioxide levels from 1950 to today. It was this discovery that gave the first alert to human-caused greenhouse effects.

Despite some continuing disputes, the basic conclusion appears to have held up. A broad consensus of scientists agrees that climate warming is caused by human-generated greenhouse gases, mainly carbon dioxide from fossil fuels. The National Academy of Sciences has supported the consensus conclusion.

Because of the dire future consequences of allowing global warming to continue, Climate Central was founded in 2008 to explain climate change and its impact to the public and to increase its visibility in the news media. They provide presentation material, for example, on the relationship between the daily weather news and climate change, to the Weather Channel, NBC and more than 260 broadcast stations and 400 television meteorologists, about 20 percent of the total in the country. Climate Central is funded by dozens of foundations, private contributors, and in part by the National Science Foundation.

Examples of timely topics recently covered are the connection between hotter years and more wildfires. Another is the significance of rising seas. The speaker showed a graphic comparing the current map of Washington, D.C., with a projected future map based on unchecked carbon dioxide growth, showing the inundation of much of the city, the effect of addressing or not addressing the climate change issue.

So, “Was that storm climate change?” For decades climate scientists have been accumulating evidence on global warming and extreme weather. The results mainly apply to trends and averages of similar events. Identifying the possible role of global warming in an individual event – Hurricane Sandy, or the catastrophic flood last year in Louisiana – is a tougher question.

Answering it is the goal of the field of climate science called extreme event attribution. It was first applied to the destructive 2003 heat wave in Europe, the cause of 35,000 heat related deaths. The analysis showed that increasing global temperatures doubled the probability of summers as hot as the one Europe saw that year.

That was the first application of the attributable-risk concept to an actual observed event. Regarding the Louisiana flood, estimates from event attribution analysis showed a more than 40 percent climate-change-related increase in the probability for the conditions necessary for the storm. The Louisiana flooding “looks a lot like climate change,” said The New York Times headline of an article last year in collaboration with Climate Central.

The speaker closed by noting the split of public opinion on climate change.  A recent poll shows that the number of people who believe the severity of recent hurricanes like Harvey and Irma is most likely a result of global climate change is about the same as the number who believe that this is just the kind of severe weather that happens from time to time.