The Midterm Election and the Future of American Democracy 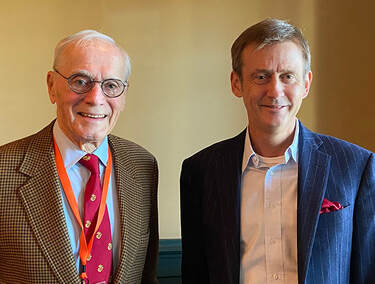 Dick Scribner introduced our speaker, noting that Professor Nolan McCarty has been on the faculty of Princeton University since 2001 and was awarded tenure in 2003. He is the author of Polarization: What Everyone Needs to Know, published by Oxford University Press.  McCarty has served as chairman of the Princeton Politics Department and is also a faculty member in the Princeton School of Public and International Affairs.

McCarty began by saying there would be no slide presentation today as he could not put one together, since the election results began coming in only a few hours ago. He hoped that his talk would stimulate a lively Q and A period.

He proposed to discuss a series of “hot takes” on the midterm election.

However, he said, although the midterms are often a catastrophe for the party in power, this does not necessarily mean that a sitting president will not be re-elected (despite Obama’s “shellacking” in his first midterm he was re-elected in 2012).

As to the context of the election, Biden’s popularity rankings are dismal, though not quite so bad as Trump’s, and, despite a pretty good economy, inflation is terrible.  Even with these factors in the Republicans’ favor, Republicans have underperformed. Why? asks McCarty. Because they put up weak candidates, miscalculating that the more extreme their candidates, the more likely they were to win, which in this event was the opposite of what happened. The widely predicted “red wave” never materialized.

The issue of abortion probably energized many Democrats and quite possibly some female Republicans too. Four state-wide referendums on abortion all came out pro-choice. McCarty made an aside at this point, commenting that the Supreme Court has become ideological, or at least partisan.

Our speaker’s next “hot take” was on the claim of many that “democracy was on the ballot.” Certainly, there are large numbers of “election deniers,” but Professor McCarty did not appear to be particularly alarmed about the state of democracy overall.

Next up was the accuracy of the polls. Professor McCarty stressed that polling is becoming more and more difficult. The response rate to polls has dropped. People are tired of being polled; many refuse to answer questions, especially by telephone, and cell phone numbers are not listed. This year’s polls tended to skew in Republicans’ favor, though some did the opposite, leaning Democrat in their results. It seems that pollsters had too little to go on, and their job this year was made harder because there were so many early voters and voters by mail.

McCarty moved on to an anticipation of the future. He expects there to be many recriminations within the Republican Party as members try to figure out what went wrong. He does not expect Trump to be taking a victory lap next week when (and if) he announces his third presidential campaign. Looking ahead, he thinks Kevin McCarthy, as Speaker of the House, would depend on moderates to help him be effective.

A lively Q and A session followed, with questions being asked about the effect of exit polls (they are subject to the same problems as regular polls); how much census numbers and the consequent redistricting will affect election results this year; whether Republican donors are likely to switch their giving from Trump to Ron De Santis, given De Santis’s big win; and McCarty’s view of rank-choice voting (it’s fairly innocuous and doesn’t make that much difference to the outcome). There were also questions about whether President Biden will run again (probably yes, since there are no up-and-coming Democratic stars to replace him); and whether younger generation voters start out liberal and over time become more conservative. One questioner wondered why no mention of climate change as an issue was made by either party, despite the success of Biden’s Inflation Reduction Act, with its tax credits, incentives, and other provisions to help companies tackle climate change.

Professor McCarty left us with the impression that he is not overly concerned about the future of American democracy despite the current state of polarization in the country.