A Proud Community Remembered in a Segregated Princeton 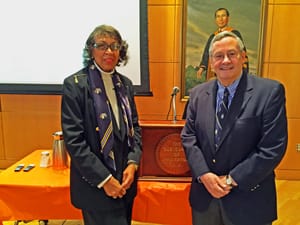 Shirley Satterfield, Speaker Owen Leach, Introducer
Minutes of the Ninth Meeting of the 74th Year
On Nov. 11 at 10:15 a.m. President Owen Leach called to order the ninth meeting of the Old Guard of Princeton’s 74th year. Roland Miller led the invocation and Keith Wheelock read the minutes of the Nov. 4 meeting.  The speaker Shirley Satterfield introduced her guest, Pauline Brown. Arthur Eschenlauer conducted the election of six new members into the Old Guard. Owen Leach then introduced Ms. Satterfield, whose talk was titled “A Proud Community Remembered in a Segregated Princeton.”

The first narrative was geographical, complete with a map from 1926 of Witherspoon-Jackson, which ran north-south between Birch and Nassau Streets and east-west between Witherspoon and John Streets. This geography was not static.  It changed with each urban renewal. When Wiggins Street was extended to Route 206, Jackson Street disappeared and residents were displaced. Later the residents of Baker Street, which ran between Nassau and Hulfish Streets, were moved to Birch Street to make way for the construction of Palmer Square.

The second narrative dealt with segregation. When New Jersey mandated public education, the Witherspoon School for Colored Children was founded in 1873 Ms. Satterfield was in grade school there in 1947 when the New Jersey governor finally ordered the desegregation of schools in the state. Segregation was a way of life.  There was a separate seating area in the Playhouse.  Playgrounds and swimming pools were segregated. Even the cemetery was segregated. Since African-Americans were not welcome in stores on Nassau Street and elsewhere in the Borough, a parallel set of businesses grew up in Witherspoon-Jackson, including restaurants, florists, barbershops, taxi services, even a weekly newspaper.

The third narrative was a counterpoint between the two sides of Nassau Street. Slaves brought to Princeton before the end of the 17th century included a number who were owned by presidents and officers of Princeton University. Those owners included John Witherspoon and Richard Stockton, both signers of the Declaration of Independence. (I note that Ms. Satterfield gave us that piece of information without the least hint of irony in her voice.) In the 18th century freed slaves migrated to Princeton from the South, and by 1790 there were 500 in residence. They were instrumental in the operation of the university, from Robert Sinkler, an athletic trainer at Princeton for 36 years, to Henry Johnson, a freed slave, who sold snacks to Princeton students from his wagon. When Mr. Johnson died the students paid for a tombstone for his unmarked grave.  The merchants along Witherspoon Street also served the university.

The fourth and final narrative was a warm and appreciative introduction to many outstanding residents of Witherspoon-Jackson. The pastors of the four churches in the community were particularly singled out. One of those pastors, a runaway slave called William Drew Robeson, was the father of Paul Robeson, the community’s best known son. There was Elizabeth Stockton. Freed from slavery in 1817, she taught English first to children in Hawaii and then returned to teach black children in Princeton. W. H. Lepore published the Citizen, a weekly newspaper. Henry Austin, an entrepreneurial physician founded four health centers, but all in desegregated Trenton. Judge Bruce Wright rose to be a justice of the New York Supreme Court.  And many more outstanding resident.

In summary, Ms. Satterfield presented a love letter from a proud daughter of the community that has been home to her family for six generations.  As she said in her closing, those were people whose blood, sweat, skills and faith sustained not only themselves but also the town of Princeton.