Achieving a Sustainable Energy Future via
Quantum Mechanics and the Andlinger Center
​
Emily Carter
Director, Princeton’s Andlinger Center for
Energy and the Environment 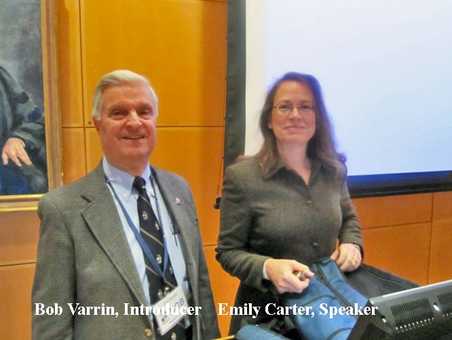 The minutes of the Nov 6th meeting were read by Nick Wilson.

Bob Varrin introduced our speaker, Emily A. Carter, who is the Founding Director of The Andlinger Center for Energy and the Environment.

The title of her talk was: “Achieving a Sustainable Energy Future Via Quantum Mechanics and the Andlinger Center.”

First, about the Andlinger Center: It is a multidisciplinary program to translate fundamental knowledge into practical ways of producing energy sustainably, conserving that energy, and protecting the Earth’s environment and climate from change caused by humans.  The Andlinger Center is the building under construction on the corner of Olden Street and Prospect Avenue.

The problem, as stated by Professor Carter, is dire: 82% of the energy that we now use in the U.S. “comes from non-renewable fossil fuels that warm the Earth, cause climate change, distort international relations, and threaten the global economy.”

Saving the planet is her goal. Pessimism was not in her vocabulary as she described technological efforts to help move the planet onto a sustainable energy path.

The theory behind her research is quantum mechanics, which, in her words, “accounts for the fundamental physics governing the energy and spatial distributions of electrons in matter.”  She develops “mathematical and physical approximations to the Schrödinger wave equation, whose eigenvalues and eigenfunctions delineate the distribution of electrons in energy and space, respectively. . . ”  She continues: “These powerful methods can be used to study systems that aim to render sustainable energy a reality: from biodiesel fuel combustion to solar energy conversion to electricity and fuels to fuel cells to fusion reactors.”