Looking Back and Looking Ahead, with Emily Mann 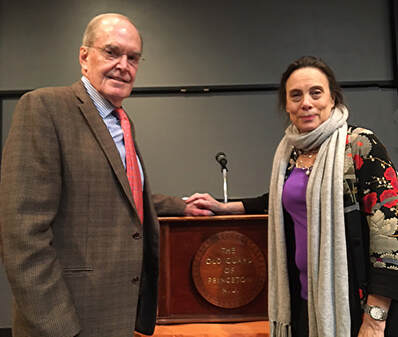 Minutes of the 10th Meeting of the 78th Year

President Coale announced that Jared Kieling has new thumb drives which can be exchanged for old ones.

The November 20, 2019 meeting will feature Rachel Devlin, Associate Professor of History at Rutgers University. Her topic will be “A Girl Stands at the Door.” The meeting will be held at the Friends Center.

Michael Mathews introduced the speaker, Emily Mann, with a quote from Lanny Jones:
Mathews continued with a beautifully organized yet delightfully informal interview of Emily in which he “wiggled out nuggets from her rich, extraordinary achievements.”

In response to his question about one of her finest hours, she talked about the first preview of her play, Having Our Say, which she had written in a rush of inspiration. Very anxious that it had all come too easily, Emily was extremely relieved when the first performance got a standing ovation. The play went on to Broadway, a national tour, a film, and was a Peabody Award winner.

The Matthews Theatre, which she loves, was not suitable for intimate new works. Though the Berlind, with Board support and a “transformative gift,” was 14 years in the making, it opened up, in 2003, many new exciting production opportunities.

Ms. Mann said selection of an individual play was always done in the context of a whole season, which has a shape, with variety in both tone and style. She looks for a banquet of choices. She cited John Jory, producer of the Louisville Humana Festival, who said, “You get more variety in five plays, Emily, than I do in twenty-two!” She laughed, describing her unexpected walk-on in Gloria—A Life at McCarter. Mary McDonnell, playing Gloria, could literally barely speak one evening. Ms. Mann, reminding us McCarter has no understudies, stepped in. “I went on with an hour of rehearsal and I had a great time!”

She characterized McCarter’s relationship with the University as “arm's length with a bend in the elbow.” While Princeton University owns both the land and building and conducts some maintenance, they have no influence on production choices. There are eight trustees from the university on the board and Princeton does manage McCarter investments, which she said was a huge blessing. Faculty members often provide research help. McCarter also offers observerships and master classes to students. “We have a synergistic relationship, but they do not provide financial support.”

She spoke of her childhood as the daughter of a Smith College history professor. “We had interesting conversations every night around the dinner table. It was not surprising that I was exposed to ideas of social justice early in my life. And the segue from that to using theatre as a means of addressing those ideas was not difficult to make.”

Mathews produced a set of playbills asking Ms. Mann to comment on some of them, which she did, with her usual candor.

Not retiring, but refocusing, she anticipated mentoring up-and-coming artists and when asked if she had a new play in her mind, she admitted she was working on two new ideas with colleagues to be produced in the next couple of years. Finally, as she looked ahead, Ms. Mann cited Gloria Steinem when she said, “I am not passing my torch. I am using my torch to light others' torches!”