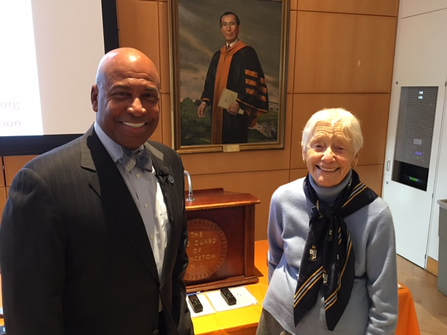 ​Minutes of the Tenth Meeting of the 76th Year

The Honorable Douglas Palmer spoke about “Education Revolution: The Second Battle of Trenton,” He told the story of a young high school girl regarded as an “offender” who had perfectly fabricated a concert ticket.  She might have had a fine career as a graphic artist.  She could not read.

Mayor Palmer emphasized the “the raw God-given talent” of all children who are counted out because they cannot read.

At the present time, over 70 percent of Trenton fourth graders read below grade level.  To address this problem, the Trenton Literacy Program has come into being.  Through a Lexia software program children in kindergarten through fifth grade are learning to read. Strong intervention must be indicated by the second grade since the children must learn to read by third grade. Using this program teachers are able to track individual student’s learning paths in order to help, intervene and give support as necessary.

Even within the first six weeks, the improvement has proved stunning. At the present time, all 12 Trenton Public schools have “bought into” the program.  Data has been collected, parents must buy in and the need remains greater than ever.  Mayor Palmer said what we all know, “We cannot afford to throw away young people.”  The shame of illiteracy is terrible.

He reminded us all as well that the greatest nation in the world is a donation.