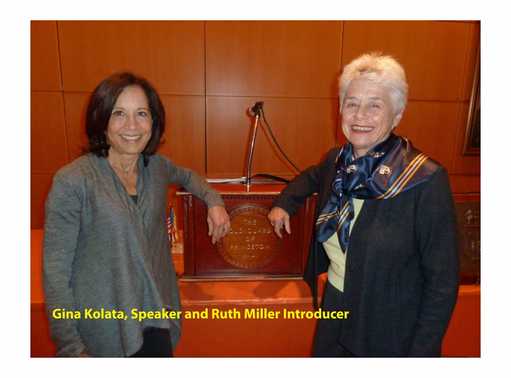 Ruth Miller introduced Gina Kolata – Senior Writer and Medical Reporter of the New York Times – who spoke about the history of Alzheimer’s disease and about recent research in its genetic and physiological origins.

Over one hundred years ago, in 1901, Dr. Alois Alzheimer, a German physician, trained in psychiatry and neuropathology, described the dementia of a 51 year old female patient committed to a Frankfurt mental asylum. Upon her death and the subsequent autopsy, Dr. Alzheimer was able to study the pathology of the woman’s brain.The brain had become shriveled and was spotted with dots and with small areas that looked like freckles. Dr. Alzheimer described the dots as amyloid plaque and the freckles as neurofibril tangles.

Autopsy is the only definitive test for the presence of amyloid beta in the brain. However, at the University of Pennsylvania School of Medicine, researchers perform PET scans on the brains of hospice patients suffering from severe Alzheimer’s. The PET scan, or positron emission tomography, produces a three-dimensional image of the brain. After death and after the following autopsy, the brain of the deceased is compared with the PET scan. The comparison confirms the accuracy of the PET scan and supports its use as a test for the presence of Alzheimer’s.

In the late 1980’s, there was a pivotal study of a large family with multiple members afflicted by Alzheimer’s. The study, conducted at St. Mary’s Hospital in London, concluded that the disease is genetic in origin --- caused by one mutated gene on chromosome  21.

The disease is genetic, and irreversible. Eleven research institutes from the United States, England and Australia, have formed a partnership known as DIAN – Dominantly Inherited Alzheimer Network, to enroll adults whose parents had Alzheimer’s.

Also at the University of Pennsylvania, Kolata collaborated with Jonathan Moreno- Professor of Medical Ethics – who raises the delicate question of how and when a medical practitioner should advise a patient, and the patient’s family, about the onset of Alzheimer’s.


Many pharmaceutical companies are trying to develop products to alleviate Alzheimer’s, and several products are in clinical trials. However, at this point in time, Kolata said, there is no cure. Contrary to popular belief, exercise, diet and life style improvements have no effect on the avoidance or remission of Alzheimer’s.