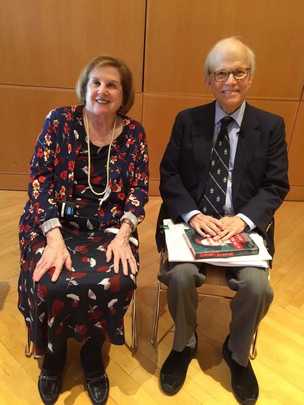 Elaine Showalter and Landon Jones
Minutes of the Tenth Meeting of the 75th Year
President Jock McFarlane presided over the meeting, which began at 10:15 a.m. Roland Miller led the invocation, and the minutes of previous meeting were read by Carmen Catanese.

After the introduction by Landon Jones, Professor Showalter confirmed that this was her first visit to the Old Guard. Born in Boston, she earned her B.A. at Bryn Mawr and her Ph.D. at the University of California, Davis.  Her teaching career was primarily at Douglass College at Rutgers and at Princeton University.  Among her many achievements are a Guggenheim fellowship, an honorary degree from St. Andrews University (2012), and membership in the Royal Society of Literature (London), as well as the “big deal” of being elected president of the Modern Language Association.

Her Old Guard talk was in Q. and A. format, prompted by questions from Landon Jones.

LJ: Why did you write this book?

ES: I had previously written a history of feminism from Anne Bradstreet to the present and remarked that virtually all the icons of the feminist movement had died young, most in their 40s. I was struck by the fact that Julia Ward Howe lived to the age of 91 and continued active into her nineties. When receiving an honorary degree from Smith College only a week before her death, she was asked for a motto for the women of America, whereupon she declared firmly, “Up to Date!”

Showalter cited three “rules” for writing biography: choose someone who (a) died young, (b) won the school handwriting prize, and (c) whose papers are archived no more than two hours from where you live. She ruefully acknowledged that in selecting Howe as her subject she had had to violate all three.

LJ: Could you tell us something of Julia’s background?

ES: Her mother died when she was still a child. Her father was immensely wealthy and endowed Julia with vast real estate holdings in Manhattan when she married Dr. Samuel Gridley Howe, a man 18 years her senior and already an established public figure, a swashbuckling hero of the Greek fight against the Turks
(for which he had “trained” by taking fencing lessons) and the first director of the new Perkins School for the Blind.

“Chev,” as Dr. Howe was known because Greece had granted him status as a chevalier, and Julia appeared to be the perfect couple -- talented, socially prominent and socially concerned. But Chev despised Julia’s aspirations as a poet and intellectual, and though he supported many liberal causes, emancipation of women was not among them.

LJ: How did the marriage work out?

ES: Chev kept Julia on a very tight rein, trampling her rights and her sensibilities alike. He sold all her New York property and invested the proceeds, unwisely, in South Boston. He insisted that they live in a chilly mansion on the isolated grounds of the Perkins Institute. Nevertheless, the couple moved in a distinguished circle of intellectuals and literati that included Longfellow, Carlyle, Dickens and Florence Nightingale, godmother to one of the Howe daughters.

Julia’s literary ambitions would not be extinguished, though, and with the publication in 1853 of “Passion-Flowers,” a collection of poems, the marriage went on the rocks. Chev was furious, not only because Julia had kept her publication plans a complete secret from him but also because of the emotionally personal nature of the poems themselves. “Passion-Flowers” garnered both praise (Hawthorne) and censure -- most particularly from Chev. Not surprisingly, Julia fell into a depression, feeling defeated as a poet. Only her association with other early feminists saved her, for here at last she found women friends and intellectual equals.

Chev died after 33 years of marriage and six children by his wife, but he left Julia not one penny in his will.

LJ: And the “Battle Hymn of the Republic”?

ES: After the mixed reception of “Passion-Flowers,” Julia never wrote any more personal poems, only occasional pieces, but a random comment from a friend that she should “write some good words for this stirring tune” [that is, “John Brown’s Body”] led to a sleepless night and a burst of inspiration. “Battle Hymn” became by far her best known and best loved poem.  Professor Showalter remarked that the original manuscript sold recently for $782,000.

LJ: What about her descendants?

ES: Julia’s three daughters remained devoted to their mother, and their two-volume biography of her won a Pulitzer prize, the first ever won by a woman for a biography of a woman.  But Julia’s devastatingly frank journals came as a shocking revelation to them, and their portrait of their mother lacks complete objectivity.