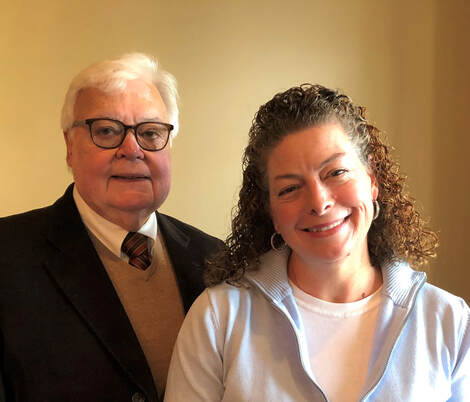 George Bustin, Introducer, and Coleen Murphy
​Minutes of the 11th Meeting of the 81st Year
​John Cotton, Old Guard President, opened and presided over the meeting. Ninety-one members were in attendance; there were no guests. Joan Fleming read the minutes from the November 9 meeting, a lively discussion of the midterm election results that had just occurred.

Members were reminded that there will be no meeting on January 4, 2023, and that meetings scheduled from January 11 through February 24 will be held on Zoom, while Springdale Country Club is temporarily closed. Dr. Cotton also announced that the next speaker, who will present in two weeks on November 30, will be Harold James, Professor of History and International Affairs, Princeton University. He will discuss "Historical Perspectives on the Ukraine War."

George Bustin introduced the day’s speaker, Coleen Murphy, a Princeton University professor in the Department of Molecular Biology and director of the Paul F. Glenn Laboratories for Aging Research.

The process of aging is one of the fundamental mysteries of biology. It would be advantageous in maintaining a better quality of life as we age. Current research supports that aging is a regulated process of cumulative cellular damage, not an unfortunate consequence of living. Dr. Murphy has focused her research primarily on a nematode or flatworm named C. elegans, as the model system for her laboratory study.

This worm is an ideal model system because its lifespan is only two to three weeks and exhibits significant observable aging in this time. It is tiny, only 1 mm in length, and can produce large numbers of offspring quickly. Each worm is comprised of fewer than 1000 cells and 300 neurons, while 60-80% of the worm proteins have human analogs. It has a potential single mutant insulin receptor (daf-2), which results in the worm living twice as long, similar to observations in humans. Thus, a range of studies have allowed for the identification of genes and pathways that play roles in extended function or are candidates for treatments with age.

Professor Murphy illustrated examples of her high-throughput experimental set-ups using microarray techniques under a microscope, where the worms can be assayed for up to five weeks. Each mother, when self-fertilizing, produces approximately 300 worms.

Several memory studies began with the worms, testing whether short-term memory training would result in long-term improvement. The results were positive, through a G-protein (guanine-binding) pathway. These studies can also be extended to aged animals. Increased hippocampal G-protein in aged mice improved their well-being metrics. Further memory protein candidate screening will continue.

In another series of studies, the worms are studied in their systemic interactions with bacteria, which serve as their natural food source (in nature, rotting fruit) but can also be pathogens. The team has learned thus far that the worms retain memory of these pathogenic bacteria for four generations. That is, four subsequent generations learn, but the fifth generation forgets. The hypothesis is that this may allow them to adapt to changing environmental conditions. This work is preliminary and opens many pathways to study intestinal flora and probiotic bacteria to promote health and longevity.