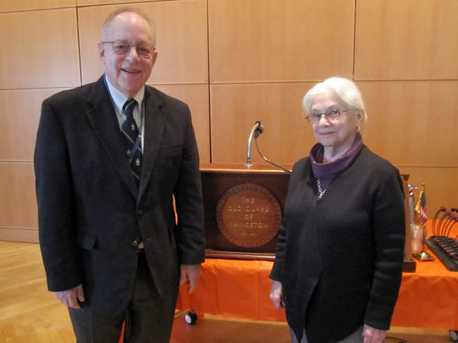 Robert Altman, Introducer, and Deborah Poritz, Speaker
Minutes of the 11th Meeting of the 73rd Year
At 10:15 a.m. at the Friend Center, Vice President Charles Rojer called to order the eleventh meeting of the 73rd year of the Old Guard of Princeton.  Joan Fleming led the invocation. The minutes of the November 12, 2014 meeting were read by Shirley Satterfield.

The newly elected members will be invited to attend the December 3, 2014 meeting.

Robert Altman introduced Deborah Poritz, who served as Chief Justice of the New Jersey Supreme Court from 1995 through 2006.

Chief Justice Poritz opened her provocative presentation, ”Judicial Independence and Judicial Activism:  Do Courts Make Law,” by pleading guilty to the accusation that she had been an activist judge and had actually made law from the bench. Her defense was based on the premise that judges are activists and, in fact, they do make law through the decisions they render.  She disagreed with the assertion that the judiciary is the weakest branch of government and most dependent on the other two—the executive and legislative. In her view, the judiciary is the strongest because the executive and legislative branches respect the judgments of the courts that in many cases fill in the gaps and clarify the ambiguities in statues and regulations. The courts can nullify acts of the legislature that violate constitutional principles. She cited several examples in which the courts made law in the name of justice to protect the rights of the few from the oppression of the many as in Brown versus the Board of Education. Our speaker drew on legal decisions pertaining to gay marriage to describe the relationship between state and federal courts and the interplay between the three branches of government.

Judges make law in resolving issues resulting from new technologies, such as disputes over the ownership of fertilized human eggs in divorce, whether police need a warrant to use thermal imaging in searching for marijuana, and in cases in which there is no applicable law or legal precedent. Judges deal with issues that are unclear and highly controversial for which there are different, reasonable pathways to judgments.  In these cases, there may be no “right” answers.  Judges frequently make law that reflects changes in our culture and society.

The term judicial activist is essentially empty of content.  It is generally used to express disagreement with the decision. Whether a judge is considered an activist depends on whose ox is being gored in the decision.
Important considerations become who makes the judicial decision, how the decision is made, and when it is made. Chief Justice Poritz expressed deep concerns about judicial independence and the adverse impact on our society of infringements on judicial independence. It must be protected whenever, wherever, and however it is threatened. In most states judges are elected. Increasingly forces within and outside the state are attempting to influence those elections through the infusion of huge amounts of money, thereby making it impossible to have a fair and impartial system. The court system can only survive when citizens respect judges and the courts and they are confident that the courts are not for sale. Even when judges are appointed, as in New Jersey, efforts to influence the decisions of the court have been made through the reappointment process and through intimidation tactics such as hate mail and threats of bodily harm making judges feel isolated and vulnerable for doing what they must do.

Many factors are considered in making judicial decisions, including legal precedent, history, logic, custom, culture, policy, and social justice. Together judges forge a collective understanding of the issues shaped by the opinion writer.  Chief Justice Poritz explained that judges are not scientists subject to rules that have been tested for their truth. The best judges undertake the resolution of critical issues with humility and rigorous analysis. The best judges have integrity and are not driven by money or partisan considerations.  The best judges take great care in explaining as clearly as possible the rationale for their opinions. Chief Justice Poritz closed by expressing her faith in our judicial system by noting that judges are human beings.  Our judicial system is imperfect because humans are imperfect. However, even with its imperfections, our system is “as good as it gets”.

The next meeting of the Old Guard of Princeton will be held on December 3, 2014 at the Friend Center.