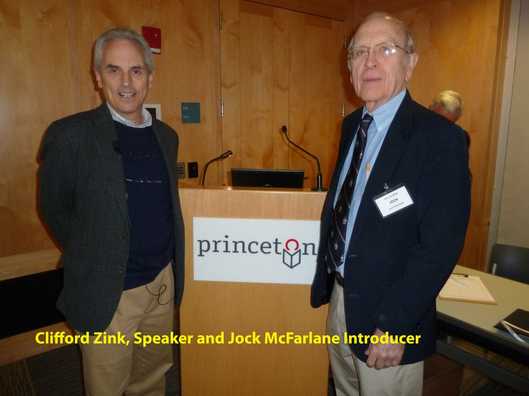 Minutes of the Eighth Meeting of the 70th Year
As seventy-nine members managed to find their way to the community room of the Princeton Public Library, President Varrin was able to call the eighth meeting of the seventieth year to order at 10.16 o’clock.  Don Edwards precented the invocation and was followed by Anton Lahnston who read his succinct and accurate minutes of the last meeting. The President encouraged applause in recognition of the Program Committee’s necessary re-shuffling which produced today’s speaker.

Jock McFarlane thanked the speaker for changing the date of his talk  and pointed out the availability of the speaker’s book, The Roebling Legacy, offered to Old Guard members for $40, a 20 percentt discouint. He then introduced Clifford Zink whose lifetime interest in the Roebling phenomenom was clear from the intimate knowledge of both the industry and the family that he conveyed to us. It all began with a Prussian, John Roebling, born in 1806, who studied at the Royal Building Academy in Berlin. Influenced by Hegel to emigrate to the United States. he settled in western Pennsylvania rather than in the south because of his aversion to slavery.

Employed to survey for railroads across the Allegheny’s, he demonstrated the advantage of using wire rather than rope, impressing purchasers with his reliability and his insistence on quality, and publicizing his views with an article in The American Railroad Journal. Progressing from a wire-rope factory on his farm to the building of suspension bridges in Pennsylvania and New Jersey, he removed his operations to Trenton. Next he built a suspension bridge with wire at Niagara to join the U.S. and Canada, a feat which Mark Twain admired.

During the Civil War, his son Washington distinguished himself by designing the pavilion for  an army officers’ ball, and by marrying the commanding general’s sister. The structure for which he is best known is the Brooklyn Bridge, completed in  1883 despite his being incapacitated for five years. He went on to do the cabling on the the Manhattan and Williamsburg bridges.

By the 1890s, it was an international concern under Washington and his two brothers. With small-scale capitalism giving way to national capitalism, Roebling’s had now to  go into making steel.  After a brief flirtation with motor cars, which cost the life of Washington II on the Titanic, the elder Washington took over the presidency of the company at 84 years of age, dying five years later in 1925. Roebling cables were used in the George Washington and Golden Gate bridges. and widely in the expanded aircraft industry of the Second World War and then in constructing pre-stressed concrete.

In the 1950s, they were bought up by a large steel company and  in 1973 fell victim to one of the new breed of corporate raiders who shut the plant down. The worship of mammon trumped Roebling integrity, and excellence.

Commendably, it has fallen to the State of New Jersey to commemorate the Roebling saga through its preservation and use of a number of the buildings designed by Roebling architects for the company’s use, as state administrative headquarters and, in one case, an “affordable housing” project.

A number of questions from members investigated wire technology, employee relations, and the influence of Roebling family members in other fields.