​Princeton Public Library and its Role
in the Future of Libraries 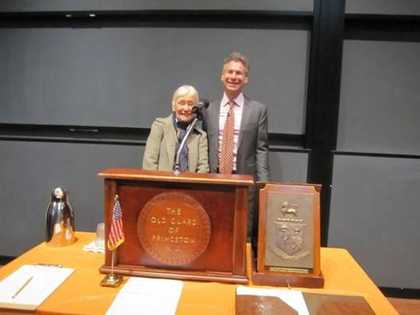 Jerry Berkelhammer introduced his wife, Sheila, as a guest.

Mr. Bonfield spoke about governance, funding, history and the future of public libraries in the United States.

Municipalities vote to approve the creation of new public libraries. There are individual municipal libraries and also countywide library systems. Princeton is an independent library not affiliated with Mercer County. Libraries are overseen by boards of trustees whose members are appointed by municipal officials. Directors of public libraries are required to have a master’s degree in library science.

Public libraries are nonprofit organizations funded by both public and private sources. In the case of the Princeton library, about 75 percent of its budget is covered by public sources and 25 percent by private donations. Limited funding is provided through federal and state budgets. Libraries collect additional funding from fines and fees, such as overdue books.

Mr. Bonfield credited two people with starting the public library system in the United States. The first was Melvil Dewey, who created the Dewey Decimal System for classifying books, a system that remains in use today.

When deciding whether to provide funds for a new library, Mr. Carnegie first determined whether the community was truly interested in having its own public library. Once satisfied with the community’s commitment, Mr. Carnegie would then fund the entire construction cost of the library. The community, including the municipal authorities, had to agree to pay the ongoing costs for staffing and maintaining the library. He insisted that libraries provide their services to the public for free.

American public libraries follow a set of core values when serving their users. Among those values are free access to their collections, confidentiality and privacy of users, education and lifelong learning, intellectual freedom, archiving the cultural record, professionalism, service and social responsibility.

Mr. Bonfield shared his thoughts on future issues facing public libraries, including how they should be assessed; new efforts to teach people how to protect their privacy online from malicious hackers and to understand better third-party surveillance; how to utilize broader bandwidths for research; and new meeting space in libraries to bring people together to exchange ideas in person.

When asked the difference between public libraries and public schools, Mr. Bonfield saw libraries as complementing schools by providing assistance when requested. In answer to a question about the size of the budget for acquiring new books, he stated that more money is being allocated to buying books, both physical and digital.