Innovation and Challenge: A Brief Look at Public Art
and Contemporary Sculpture 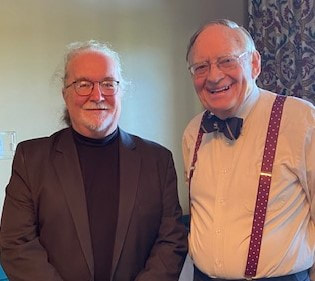 Thomas Moran, Speaker / Scott McVay, Introducer
​Minutes of the Ninth Meeting of the 81st Year
President John Cotton called the meeting to order at 10:15 AM. Ninety-five members were in attendance; there were no guests. Membership was assigned the task of memorizing the first verse of the invocation by the next meeting!

Madelaine Shellaby read the minutes from the prior meeting. Members were reminded that there will be no meeting on January 4, 2023, and that meetings scheduled from January 11 through February 24 will be held on Zoom, while Springdale Golf Club is temporarily closed.

President Cotton announced that next week’s speaker will be Nolan McCarty, Professor of Politics and Public Affairs, Princeton University. Mr. McCarty will deliver remarks on “The Midterm Election and the Future of American Democracy.”

Scott McVay introduced our speaker, Thomas Moran, former Chief Curator at Grounds for Sculpture.  Mr. Moran is a recognized expert in the field of public art, as well as a sculptor in his own right.  His illustrious career included the completion of over 400 public art projects and memorials; he also served as consultant to foundations, museums, governments, and artists. He is a national and international expert, a highly sought speaker and accomplished writer.

Mr. Moran guided the members through a sampling of public art and contemporary sculpture, including many projects he has overseen. Beginning with Eero Saarinen’s “Gateway Arch,” touching upon Michael Heizer’s recently completed “City” in the desert of Nevada, and ending with Anish Kapoor’s monumental sculpture “Cloud Gate” in Chicago’s Millennium Park, our speaker highlighted important works of public art and contemporary sculpture.

As the abstract expressionist movement began to wane in the 1960s and, with the development of new materials, processes, and technologies, artists and architects were afforded a vastly expanded range of tools and options for their creative palette. Post WWII, a spirit of optimism surged through the country. The quality of life for many Americans improved significantly and renewed energy fueled artistic development. A renaissance of interest in public works and monuments was enhanced by the Essential Arts Program, which allowed up to 1½% of the budgets for public construction to be spent on the purchase and commission of public art.

The State of New Jersey played a pivotal role in this creative flow, aided by the Capital City Redevelopment Corporation, with works that can be viewed throughout Trenton. Nam June Paik, a Korean artist, credited as the father of video art, created a major piece for the NJ Network, a tour de force of digital art.  Rutgers University and The College of New Jersey (TCNJ) hosted fine examples of public art, with Willie Cole’s “Pixels” at TCNJ an emblematic example of the scale that new materials and manufacturing processes permitted.

The creation of massive pieces, from Seward Johnson’s “Marilyn” to the 9/11 Memorial “Empty Sky” in Jersey City, is representative of this new scale of artwork in New Jersey. Artists and architects were spurred to produce work they hadn’t heretofore thought possible. Indeed, one could posit that these new materials and technological processes redefined what is meant by the word “sculpture.”

​Land art, another vastly expanded medium, found expression in exceedingly divergent works. Here again, New Jersey spawned numerous artists who took inspiration from myriad sources, including industrial sites, ancient monuments, and, if one can imagine, the NJ Turnpike and even Route 1! Earthworks and the interest in “displacement of perception” pushed the viewer to expand the definition of sculpture, even as artists pushed their creative boundaries. Robert Smithson’s “Spiral Jetty” on the shore of Great Salt Lake affords a stunning example of unfettered artistic vision melded with new materials and public clamor for scale, for the “wow” factor. Many new tourist destinations resulted from these artistic achievements.

Women artists, not to be overlooked, as well as the development of performance art, could only be briefly touched upon in today’s lecture. Mr. Moran assured Old Guard members that he would be delighted to expand further on much that he necessarily omitted.

All in all, it would be hard to disagree with the expression that “bigger is better,” at least in the world of contemporary sculpture!