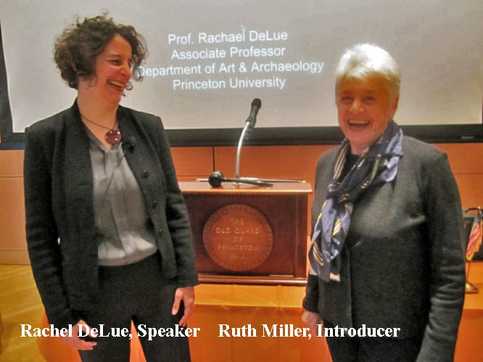 Minutes of the 11th Meeting of the 72nd Year
The meeting was called to order by President Miller at 10:15 AM.
Joan Fleming led the singing of the convocation.
Minutes of the meeting of November 13 were read by Sarah Hollister.
Members introduced their guests:
Jane Faggen, guest of Michael Kaplan;
Karl Morrison, guest of John Fredericks;
Marsha Levin-Roger, guest and wife of Charles Rojet.
Today’s attendance: 97 members and guests.

Announcements included reminders to pay dues, the availability of Old Guard ties, scarves, and lanyards; there will be a meeting of the Executive Committee on December 4 at 1:45 PM in the Gun Room of The Nassau Club; there will be no meeting on November 27 in observation of Thanksgiving; the next meeting will be on December 4th preceded by a hospitality gathering at 9:30 AM and university president Christopher Eisgruber will be in attendance for “meet and greet” until 9:45.

Ruth Miller introduced our guest speaker, Professor Rachael DeLue in the Art and Archaeology Department of Princeton. Her special interests are the history of American art and culture, forms of the intersection of art and science, and the history of African American Art. Her publications include discussions of the artists Camille Pisaro, Spike Lee, Arthur Dove and Samuel H. B. Morris, plus a treatise on the relationship of art writing and medical diagnoses around 1900. She has been a consultant to several museums and has joined faculty panelists at programs for the professional development of high school teachers of art. Her PHD is from Johns Hopkins University.

Professor DeLue illustrated her address with slides projected on the large screen. The first was a painting now in the collection of the Princeton University Art Museum titled “Attack in Pleistocene England” of 1868 by Benjamin Waterhouse     Hawkins. It portrays four smilodons (saber-toothed tigers) attacking three  mammoth elephants with a pack of hyenas attacking from the rear. This and 16 other paintings were commissioned by Princeton Professor Arnold Guyot, to be based on fossils and skeletal remains in the university’s Elisabeth Marsh Museum of Archeology and Geology then housed in what is now the Faculty Room of Nassau Hall. Such a charge, for the first time, introduced questions for the artist such as how did animals from deep history move and behave and what the color of their skin, hair, or eyes, was. The artist could get clues from present day animals of similar types but much of his work was sheer imagination. His challenge was “how do you make a painting of nothing?”…of substance that cannot be observed?

A different sort of dilemma was presented by two works of artist George Inness: “Home of the Heron” of 1891 and “Landscape with Trees” of 1889. To art observers of the late 19th century, accustomed to the lush landscapes painted “en plain air”, that is, while sitting outdoors in the landscape, these dark and forbidding scenes in the first instance and the shockingly bright and luminous (called “poisonous” by one critic) in the second were upsetting. Inness freely admitted that he painted indoors, from memory – attempting to evoke emotional reactions that he had when in the landscape. This was a world reimagined or dreamed by the artist, not reality observed.

Professor DeLue referred to projected 16th century drawings by Leonardo Da Vinci from his more than 400 anatomical illustrations to make the point that art can serve science by presenting the facts of the human body by stripping away the skin to expose the muscles and sinews that give form to the body in all its postures.

To expand on Da Vinci’s statement that an artist “has to lie to tell the truth” she projected a slide of the huge painting “The Heart of the Andes” by Frederick Church (1859) which today hangs in New York’s Metropolitan Museum of Art. She enlarged areas of the canvass that are precise down to the dust on a butterfly’s wing. In fact this is not an actual scene. It is a composite of 25 to 30 sketches made at various places in Ecuador combined to show an imaginary landscape. The elements are scientifically true at a moment in time but the world in which they are shown is imaginary geography from the brush of Mr. Church. Frederick Church was a devoté of Alexander Von Humbolt whose 1859 book “What is Earth” argued that all existence displays a harmonious logic formed in finite time by divine inspiration, a notion that today would be labeled “intelligent design theory”. In the same year Charles Darwin published “The Origin of the Species” which posited a world of living creatures going back in deep time with many fallible changes and blunders in development, including extinction of those not suited to a physically changing environment. This “collision of art and science” as Professor DeLue called it was a dilemma for artists: “How does one do a painting during a paradigm shift?”
She compared two well know paintings, one of 1875, “Gross Clinic” by Philadelphia artist Thomas Eakins and “Anatomy Lesson of Dr. Nicholas Tulp” of 1632 by the Dutch master Rembrandt Van Rijn. These are both depictions, by the best artists of the time, of scientifically important events with recognizable personages in recognizable locations. The former is far more graphic, detailed and emotionally charged than the latter, but both are art in realistic service of science.

By contrast we viewed “The Long Island Shore” by 20th century artist Arthur Dove. We sense that we’re seeing water, land and sky, but the colors, shapes and textures are disfigured and distorted from reality, becoming dream-like and non-objective. We are offered the artist’s personal experience of the scene before him, not his best effort at realism. It is his “way of knowing.”

Early in the talk we saw a photo of a crude model of the double helix welded from scrap wire and sheet metal to describe the form of a DNA molecule, a revelation for which James Watson and Francis Krick received their Nobel Prize in 1962. Scientists regularly look to images for illustration of scientific knowledge, particularly if those images are as fleeting as in the CERN Hydron photon accelerator or invisible to the naked eye as in the DNA molecule. These are scientific “ways of knowing” assisted by art.

In response to questions this additional knowledge was elicited:
The term “gross”, meaning yukky was probably not coined in response to Thomas Eakins painting “Gross Clinic.”

The Hawkins painting “Attack in Pleistocene England” is occasionally on view in the Art Museum and might possibly be seen by appointment.