A Girl Stands at the Door 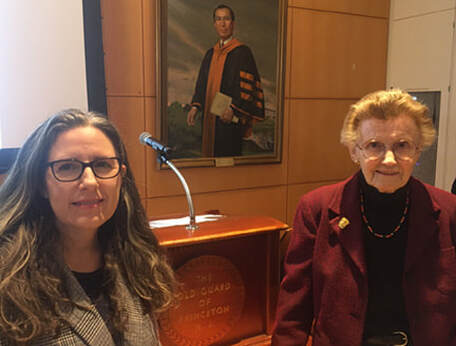 Minutes of the 11th Meeting of the 78th Year

Julia Coale presided over the meeting on November 20, 2019. Roland Miller led the invocation, and Julie Denny read minutes of the previous week, “Looking Back Looking Ahead: with Emily Mann and Michael Mathews.”

There was a moment of silence in memory of Old Guard members Charles West and Ray Close who died recently.

Rachel Devlin is an associate professor of history at Rutgers University. Her Ph.D. is from Yale University, 1998. Her specialty includes modern U.S. women’s history and gender history. Her recent, award-winning book, A Girl Stands at the Door: The Generation of Young Women who Desegregated America's Schools (Basic, 2018), considers the disproportionate number of girls who filed lawsuits prior to Brown v. Board of Education, and who were desegregation "Firsts" at historically white schools.

Rachel Devlin gave an account of tracking down the women who were desegregation “Firsts” before and after the Supreme Court decision, Brown v. Board of Education (1954). It was a radical act to become the face of a lawsuit at a time when no state in the nation had desegregated schools and when the Black community was divided about desegregating as opposed to equalizing schools.

Devlin explained that the “Firsts” learned how to navigate racial harassment by watching their mothers who worked in domestic service. Doris Raye Jennings and Doris Faye Jennings had witnessed their mother’s politely steadfast response, “No Ma’am,” to an employer who assumed the daughters would someday work for her. Devlin then proceeded with accounts of eight desegregation cases.

1. At the University level, Lucile Bluford applied 11 times to Missouri School of Journalism before the University shut down the school rather than admit her (1942).

2. It was a different story for Ada Lois Sipuel who rejected an offer of a separate school, then successfully desegregated Oklahoma Law School (1948). On winning her lawsuit, the socially adroit Sipuel told reporters, “It’s a wonderful constitution . . . justice for everyone.”

3. In primary and secondary schools, the pattern for desegregating was to attempt to enroll, be refused at the door, and then file a lawsuit. Results varied. The Jennings sisters (mentioned above) became plaintiffs against Hearne High School in Texas (1947), but the Ku Klux Klan was so threatening that the girls had to be sent away.

4. Gail Etienne, Leona Tate, and Tessie Prevost, later known as “the McDonough three,” had to be escorted by U.S. marshals when they integrated a New Orleans first grade (1960). The teachers, said Prevost, encouraged harassment of the little girls but when they got to be eighth graders, they would fight back -- and get suspended.

5. Millicent Brown told a hostile school board, “I make friends wherever I go.” The New York Times subsequently pictured Brown laughing with Barbara Solomon at Rivers High School in Charleston, South Carolina (1963); the photo, however, was taken outside the school because of bomb threats the first day.

6. Marion Greenup recalled the jubilation at Baton Rouge High School on November 22, 1963, when John F. Kennedy was assassinated. Freya Anderson Rivers, another "First," cited the threat, “We killed Lincoln, we killed Kennedy, and we’ll kill anyone who. . . .”   The rest can remain blank.

7. Rubye Nell Singleton Stroble, was one of six girls who integrated the high school in Albany, Georgia, despite mass jailings (1964). Stroble told Devlin that “Firsts” were like “soldiers going to war”; “it’s a job to do.”

8. Finally, Devlin told of a manager who stopped a mixed-race, mixed-gender “jump in” at a whites-only pool in St. Augustine, Florida by pouring muriatic acid into the water (June 18, 1964). Devlin speculates the New York Times’ front-page photo of this incident helped pass the 1964 Civil Rights Act.

In the Q&A, Devlin described the professional career of Ada Lois Sipuel, a “First” who became a lawyer and eventually a regent for the university she had integrated. Sipuel voted in support of an endowed professorship for Anita Hill.

By way of conclusion, Devlin confirmed that “it’s the students who made Civil Rights history, not just the lawyers.”