​London and the First Era of Globalization

Michael Bordo
Professor of Economics and Director of the Center for Monetary and Financial History, Rutgers University 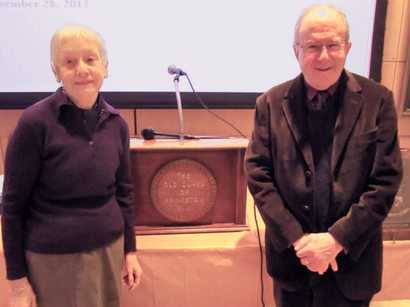 Claire Jacobus, Introducer, and Michael Bordo, Speaker
Minutes of the Ninth Meeting of the 71st Year
President Miller convened the ninth meeting of the 71st year of the Old Guard at precisely 10:15 a.m. in the Friends Center, with 118 persons attending. Tom Fulmer led the customary invocation. The minutes of the last meeting were read by Joan Fleming. The President advised the members of the sad news of David Reeves’s death and a moment of silence was kept. She also mentioned that almost thirty members had still not paid their dues. Helen Hamilton introduced her two guests, Beryl Felsher and Caloyn Massad.

Claire Jacobus introduced Michael Bordo, Rutgers Professor of Economics and Director of the Center for Economic and Financial History, a graduate of McGill, the LSE and  the University of Chicago. After a series of adjustments which always seem to be required of Princeton’s audio systems, Mr. Bordo gave a  talk which, though lasting only a half-hour, inspired questions for a further thirty minutes.  He told the story of the first era of globalization, dominated by Britain from 1880 to 1914. That era ended when the free movement of goods, labour and capital ended.
He exhibited that marvelous Canadian ability to modify if not deflate American hubris with an infusion of perspective drawn from an intimate and insider's knowledge of British experience. Perhaps it is no accident that the new Governor of the Bank of England is a Canadian.
The City of London in the 19th century had half of the world’s oversea investments. Almost all world trade was financed by sterling bills, including North American railways. The speaker quoted a passage from John Maynard Keynes describing the period when a British businessman could feel he was persona grata everywhere, and took it as a matter of course. The first reason for this dates from 1688 when Parliament’s supremacy began to provide the rule of law and the sanctity of property rights.
Second, the Bank of England lent money to the state through bonds redeemable in the future, a system made feasible by a reliable civil service and effective taxation system. Greece, in contrast, is among those countries which are in a mess because they cannot levy taxes. France had an unsatisfactory taxation system and hence a history of debt default.
Third, the bank's monopoly on the issuance of notes meant people could hold paper rather than gold and since banks discovered not everyone would turn up together demanding their gold, they could lend out more than they possessed. Baget's rule came into play, in which financial panic was mitigated by lending money to a beleaguered but reputable institution with no questions asked. Also, in times of trade deficits, the bank would raise the bank rate to attract buyers. This worked, the last British panic was in 1866 until a lesser one in 2007, whereas the U.S. had four such panics between 1873 and the Federal Reserve's founding in 1914 to do the same sort of thing.
The fourth element was the invention of the Stock Exchange which settled down after a rocky start.  But after Victoria's reign, Germany and the U.S. passed Britain in production and later in per capita income. The worst blows were the two twentieth-century world wars when Britain had to cash in its assets, borrow heavily and print money. The attempt to restore the gold standard in 1925 made matters worse.  By the 1970s, sterling was no longer a reserve currency.
If the first era ended with the decline of Britain, the second era is seeing a decline of the U.S. which had taken over from Britain. Lessons for the U.S. include – empires never last, globalization spawns economies which overtake their parent, and economic decline means military retrenchment from acting as the “world's policeman”.
Twelve questions covered the relationship between the ability to tax and the need for balanced budgets, the relationship between economic and military power and the possibility of shared collective security, converging economies and democracy, Argentina, the importance of Keynes, the likelihood of a fiscal cliff, and negative spin-offs of globalization such as inequality which we ignore at our peril.
The meeting adjourned at 11:30 a.m.