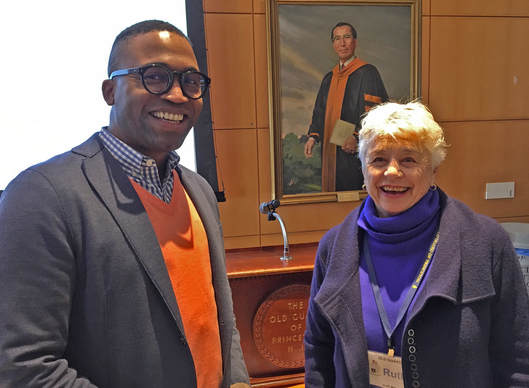 Minutes of the 11th Meeting of the 77th Year

Julia Coale, president, called the meeting on November 28, 2018, to order at 10:15 a.m. Julie Denny led the invocation, and Rob Frazier read the minutes of the November 21 meeting.

Frederick F. Wherry, Ph.D., spoke to us on “Credit Where It’s Due: Rethinking Financial Citizenship.” Dr. Wherry holds an MPA and a PhD in Sociology from Princeton University. Currently he is Professor of Sociology at Princeton.

According to our speaker, our financial system is “separate but unequal.” About 28% of the black and Hispanic population has no credit score at all. This compares with about 16% of white Americans and 17% of Asian Americans. Without a credit score, these minorities have no access to bank loans or the financial system as a whole. Financial independence is a far greater problem for minority individuals than for white Americans.

Lack of a credit score amplifies the disadvantages these minorities already have in our society. If one has no credit score or a bad credit score, one cannot get mainstream services such as credit cards or bank loans. Dr. Wherry argues that bad credit is like having a criminal record. When employers seek to hire applicants, a bad credit score tells the potential employer that one is unreliable and has made bad choices about handling money. Thus lack of decent credit scores creates a barrier, preventing minorities from achieving the “American Dream.”

With funding from various foundations, Dr. Wherry has performed in-depth research on the availability of credit. His team has interviewed many people who have no credit scores with the result that 46% of Americans cannot pay $400 in an emergency situation like a car crash or an illness. Our speaker has worked with the Mission Asset Fund to develop lending circles of people without credit availability. The people were given coaching on their financial affairs with a 90% success rate to establish credit scores and a 168-point average increase in credit score rating for those who have a low credit score.

Dr. Wherry conducted in-depth interviews with 61% of people having no credit score or subprime credit. These people lacked access to our financial system and to the American dream of home ownership. They could not get a mortgage or a responsible job and had to resort to borrowing from payday and other very low quality lenders. Frequently, they borrow and lend among family and friends. That behavior fails to create a bank record or a credit rating. These people pay far more for a house due to higher interest charges and are often denied an application to rent an apartment.

Dr. Wherry notes that he did not do experiments like some social scientists. Rather, he did interviews asking about financial health, budgeting, and financial services used in the last six months. He found there is pressure within the family to provide loans among family members that in turn reduces the ability of individuals to build up their own assets. One unexpected finding was that some interviewees stated they wanted a decent credit score for the “pursuit of happiness” as promised by the founding fathers.

In summary: Lack of a credit score or bad credit is a huge barrier to fulfilling the American dream. Many minorities live outside the financial system. Financial coaching has been shown to move most of the minorities interviewed into the financial system with good success providing one possible solution to attaining financial citizenship. Overall, Dr. Wherry’s work provides groundbreaking insights into how lack of credit is preventing many minority individuals from achieving financial independence and, thus, the American Dream.