The Joy of History 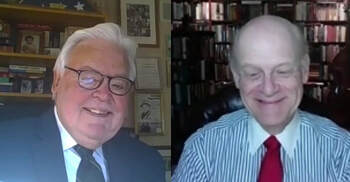 Marge D'Amico, Introducer, and Rachael DeLue
Minutes of the Ninth Meeting of the 80th Year
President Stephen Schreiber called the meeting to order at 10:15 AM. Attendance was recorded at 143 persons. Kathryn Trenner read the minutes of the prior meeting. George Bustin introduced Dr. Allen Guelzo, James Madison scholar at Princeton University, whose latest book is Robert E. Lee A Life. Dr. Allen Guelzo is a distinguished American historian who boldly marches to beat of his own drummer. He has written widely acclaimed books on Lincoln, Gettysburg, Jonathan Edwards, and, most recently, Robert E. Lee.

Speaking on the topic: The Joy of History, Guelzo succinctly expresses his personal credo on his joy and responsibility in writing history:

“No history can ignore how easy our lives have been made, compared to the lives of our great-grandparents. Bear in mind, though, that we developed all of this, sitting right beside Jim Crow, the limitation of the franchise to males (mostly white), the predations of the robber barons, and [feeble] protections for free speech.”

​“Finding meaning in history does not compel you to tell one story which all is beaming with goodness and light, or to play constant games of beggar-my-neighbor by only telling another story full of misery and oppression.”

Guelzo relates this to his recent book on Robert E. Lee. He regrets Lee’s failure to speak out against slavery. He laments that, by joining the South, Lee dishonored the flag and the Constitution he had served for thirty years as a U. S. Army officer. On balance, he writes well of Lee.  For Guelzo, good history writing never lets us put out the sunlight; it finds, side-by-side, generosity, courage, and tragedy, and it never allows us to indulge meanness or contempt.

Guelzo speaks of history’s unhealthy state. In many schools the study of history has sharply declined, as have college history majors. He is troubled by conspiracy history. History can be done badly. It can be the product of poor craft and unreadable writing; worse still, it can be perverted from the search for meaning in the past to the service of suspicion and conspiracy-mongering in the present. He observes that we are suckers for history around suspicion because we are habitually suckers for suspicion.

Guelzo believes that conspiracy theories are particularly risky because they are self-reflective; in their passion to explain everything, they cannot admit any detail which might falsify them, and anyone who intrudes an objection is held to be in on the fix. He refers to Richard Hofstadter’s seminal book on the paranoid style.

Guelzo is heartened that local historical societies have blossomed, history non-fiction outsells fiction titles, and producers clamber over one another to produce history programs and documentaries (including two new Lincoln documentaries in which Guelzo is involved).

Guelzo believes that perhaps history can do its best service by offering us moral models—examples of human behavior either to embrace or to avoid, and the ironic truth that both can sometimes inhabit the same human skin. Guelzo cautions that if we allow ourselves to become indifferent to our history of republicanism, then that will involve a system failure of civic education and self-knowledge at every level. He states bluntly that if we do not tend to our history, the flame of our civil community will gutter-out.