The Many Faces of Leadership 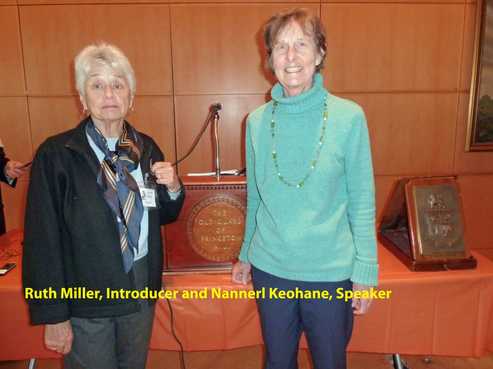 Our Speaker, Nannerl Keohane, was introduced by Ruth Miller. Professor Keohane is currently Distinguished Visiting Professor of Public Affairs at the University Center for Human Values. Her topic was, The Many Faces of Leadership.

Professor Keohane received her doctorate in political science from Yale. In 1985, she became president of Wellesley College, and in 1993, she was named president of Duke University. Among her recent and numerous publications is Higher Ground: Ethics and Leadership in Higher Education.
Professor Keohane began her remarks by defining leadership as “determining and clarifying goals for a particular group, then bringing together the members to accomplish those goals.”

While acknowledging the conspicuous, aggressive style of leadership we often associate with corporate CEOs or army generals, Professor Keohane spoke of “quiet leadership,” leading from behind, as Nelson Mandela termed it, in the manner of a shepherd gently keeping his flock together and moving forward.

This less conspicuous leadership, Professor Keohane remarked, is often associated with women. She was part of a Princeton University committee that explored the leadership qualities of the University’s women. The committee found that, traditionally, women students prefer a supporting role, rather than a top position like class president, and they are most interested in working with organizations that contribute significantly to society. However, the reluctance to seek top honors may be changing, as this year, three of Princeton’s four Rhodes Scholars are women, as are four of five Marshall Scholars.

What are the traits or skills of effective leaders? The most important general quality is good judgment. Some others are:One of the many questions that followed Professor Keohane’s presentation was, “Why do we see such widespread failure today in political leadership?” Her response cited a culture of demonizing one’s opponents that poisons any negotiation, and the relentless focus on failures and corruption in government that, in many peoples’ minds, are the norm of political life and discourage potential leaders.

Another questioner asked how leaders can maintain humility, a sense of their own fallibility. Professor Keohane suggested that a leader should, above all, try to keep a sense of humor, including an ability to be amused at oneself. She also urged that a leader’s family and friends have an obligation to speak truth to power, and a wise leader will listen.