​Historical Perspectives on the Ukraine War 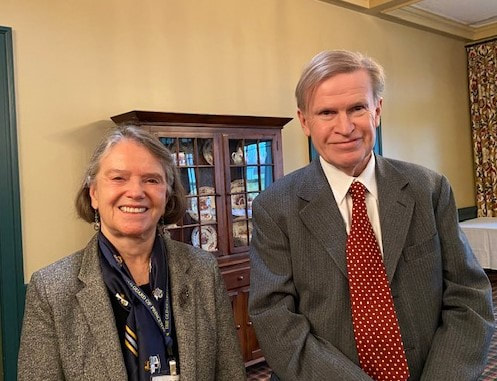 Micky Weyeneth introduced our speaker, Harold James, who was born and raised in the United Kingdom. He completed his undergraduate education at Gonville and Caius College, Cambridge University, and received his PhD from Cambridge in 1982. From 1978 to 1986 he was a fellow of Peterhouse College, Cambridge. He began teaching at Princeton University in 1986.

Harold James is Professor of History and International Affairs at Princeton University and an associate at the Bendheim Center for Finance.  He has written many books, mainly focusing on European economic history. His latest book, The War of Words: A Glossary of Globalization, was published in 2021.

The beginning of the Russo-Ukrainian War was very similar to the beginning of World War I in 1914. It came as a complete surprise to most observers. At that time, most thought war was impossible because of the close economic ties between nations. If war did occur, it would be quick. The Ukraine war was similar in that it came as a shock and surprise to everyone. Emmanuel Macron in France said that Vladimir Putin must be insane.

However, the Ukraine war should not have been a surprise if one understands the mindset of Vladimir Putin. Putin’s behavior reflects the same mind set as the 19th century imperialists who led many European countries to war over 150 years ago. The behavior is similar in five ways.

First, the imperialists wanted to build an empire as a means of reversing a decline in national fortunes. History has many examples, including Britain, France, and Germany, who tried empire building, to strengthen their country. Russia has declined greatly since the breakup of the Soviet Union, which Putin described as catastrophic.

Second, the imperialist must justify the empire building. In the 19th century, imperialists argued that their system was better, and that people were better off with them in charge. Today, Russia is offering an alternative to the capitalism and neo-liberalism of the West which led to the financial crisis of 2008.

Third, is the use of nationalism to justify empire building. Imperialists used a similar language or religion to justify bringing nations together. Putin has done the same with Ukraine.

Fourth, the geopolitical mindset is an important factor. The geopolitical view is that a state must dominate the nearby countries. It also encourages a “you win—I lose” mentality which makes co-operation very difficult. A recent bomb attack in Russia that killed the daughter of Aleksandr Dugin, a geopolitical thinker with influence on Putin, may have been an assassination attempt.

Finally, there is a time window for empire building in that an opportunity now may not be available in the future. Russia is a very important source of fossil fuels today, but that leverage will probably decline in the future.

So, the mindset of Putin is very similar to that of the 19th century imperialists, and he is probably not insane. He is very isolated and probably not receiving honest advice from the few people around him.

The Ukraine war has had three phases so far:

The first was the expectation of a quick victory by Russia.  However, the military might of Russia was overestimated and the resistance of Ukraine was underestimated. A quick victory did not happen.

The second phase was Russia’s attempt to undermine the supporters of Ukraine. Putin thought that high energy prices and inflation would reduce support for the Ukraine in the USA and Europe. The midterm elections did not repudiate the USA support of Ukraine. Ukraine’s EU supporters did not waver.

The third phase just began. Now Russia is retreating but attempting to make Ukraine unlivable.  The outcome of this phase is unknown.

How could this war end? Professor James sees parallels to the 1956 Suez crisis when France and Britain invaded without consulting with the US. The US put pressure on the two countries and the crisis was resolved. Russia invaded without consulting other countries. Today, only China has enough leverage to tell Russia to stop. Chairman Xi cannot see it in his interest to have an autocratic leader with poor judgement continuing with a war. So far, he has not intervened.