First Look Back at Yesterday's Elections 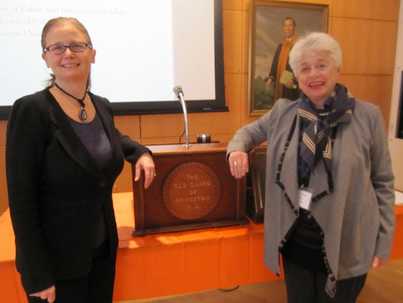 Brandid Canes-Wrone, Speaker, and Ruth Miller, Introducer
Minutes of the Ninth Meeting of the 73rd Year
The ninth meeting of The Old Guard of Princeton in its 73rd year was called to order at 10:15. The Invocation was led by Julia Coale. The Minutes of the October 29th meeting were read by David Rosenfeld. Guests included Cindy Clark, wife of Charles Clark and Bill Schaeffer, friend of Guy Woelk.
112 members were present.

The President announced that a mailing would go out soon to members, listing Membership candidates and their bios. Citing the Old Guard’s interest in reducing printing and postage costs, he urged members to open this communication and read it. He also asked any who had changes in their personal emails to let Membership Chair Ed Weiss know.

He reminded the less than 20 members with outstanding dues to step up to the plate and pay. Charlie Clark was standing by to accept checks.

In view of a speaker’s recent dizziness, an EMS plan has been put in place. Dr. Charles Rojer and Dr. Charles Clark will be first and second attending physicians, prepared to deal with any medical emergencies during future meetings. In case of such an emergency, the attending physician will determine appropriate response and the need if any to call 911.

Next week’s meeting will begin at 10:15 in the Multi-Purpose Room at the Carl Fields Center. The speaker will be Eliot Daley whose presentation will be on Mr. Rogers’ Neighborhood: Why Did It Work and What Was Fred Really Like?

Ruth Miller introduced the speaker, Brandice Canes-Wrone. A member of Princeton’s class of 1993, she received a PhD from Stanford Business School and is currently Donald E. Stokes Professor of Public and International Affairs at Princeton.
Professor Canes-Wrone confessed that rather than do an all-nighter, she had written a sizeable chunk of her presentation before the election results were in. She therefore apologized for changing the title of her 2014 Midterm Election talk to “Continuity and Change,” a title she characterized as “safe.”

Speaking of continuity, she described three Fundamentals which influenced the midterm vote:

Canes-Wrone then shifted her focus from Continuity to elements of Change.
Immigration. It is unlikely that a successor would take away green cards, so Obama might be right to use his Executive Order option in this arena.

Environmental Action. This one is complicated. Many Democrats are in oil states, fracking states, etc. This is not a clear party issue.

Courts Judicial vacancies. 10% of the District Court positions are not filled. Look for Obama to nominate as many judges as he can.

More regulatory oversight. The Republicans will work to limit the influence of regulatory agencies.

In answers to a number of questions, Canes-Wrone said
1) she didn’t think good campaigners won elections but bad campaigners could lose them; Republicans winnowed out candidates early who might slip up; Democrats did not;
2) name recognition and legacy clearly were not always predictors of victory;
3) Citizens United ruling will not have a large effect on elections but may have an impact on policy;
4)  she is optimistic about finding a way to address the gap between the rich and the poor, but acknowledges it is a real challenge - globalization has many benefits but it has also cost many jobs;
5) she doesn’t think a change in term lengths for Representatives would change their focus on fund raising or enhance their legislative activity;
6) The RDI has not kept pace with other economic indicators because of ongoing corporate capitalization, skittishness of employers resulting in a reluctance to hire and increasing healthcare costs, and
7) voter IDs will prevent a small percentage of people who vote today but are not entitled to vote from doing so, i.e., ex-felons and immigrants who get drivers licenses accompanied by voter registration forms.