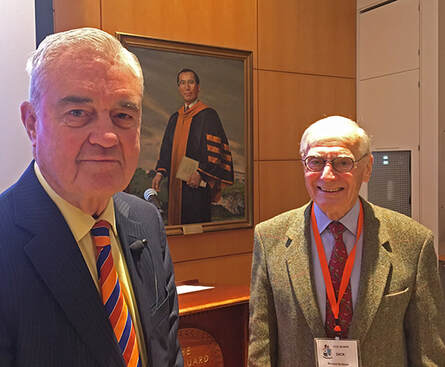 Minutes of the Ninth Meeting of the 78th Year

​Julia Coale was the presiding officer, Charlie Clark led us in the invocation. Larry Hans read the minutes of the previous meeting. Julia thanked the Hospitality Committee for another great spread. Congratulations to the Program Committee for completing the winter and most of the Spring 2020 schedule. New members were welcomed today and asked to stand with their sponsors for an Old Guard welcome. The Executive Committee will meet today at 1:45 p.m. at the Nassau Club. The next meeting of the 78th year will meet November 13, 2019, in Maeder Auditorium inside the Andlinger Building. The speaker that day will be Emily Mann retiring Artistic Director of McCarter Theater. Her title will be "Looking Backward and Looking Ahead."

Dick Scribner introduced our speaker, Jim Wickenden, the Dean of Admissions at Princeton University from 1978 to 1983. Jim is currently President of Wickenden Associates, which locates headmaster candidates for schools throughout the United States. Jim founded his firm in 1986. His talk was titled “Selective Admissions, Insights and Predictions.”

The focus of Mr. Wickenden’s talk was admissions at Princeton, then and now. His first topic was identifying groups who get a special look. He said the admissions used to be discriminatory by sex, religion, and race. College admissions has “never been fair.” College admissions still favors rich, advantaged, and special groups.

Special consideration is given to the following groups: First, legacies who account for 14% of admissions now, the same as when he was admitted to Princeton, but legacies account for 33% of Harvard classes today. Other favored groups are “students of color” and “recruited athletes.” All coaches get some picks and he spread the picks across all sports teams.

A small group receiving special consideration consisted of candidates whose parents could give “transformative gifts” to the university. In 2019 this process no longer exists. Gifted musicians send their tapes to the Music Department. Another group that can receive special consideration are faculty children. The final group consists of students with low socio-economic background. Today, 24% of the entering class is eligible to receive Pell grants for low income applicants.

In the next section of the talk, Mr. Wickenden explained how an entering class was built. Applicants were evaluated on a one to five scale in academics with one being the best score. Separately, they were evaluated on a one to five scale on non-academic factors. In his era at Princeton, the Admissions Committee considered candidates with a combined academic and non-academic score not to exceed four. Then the committee would consider special groups as described earlier. Now he is pleased to report that no admitted student has to borrow money to attend Princeton.

Wickenden next described some amusing “memorable moments” from his years as Admissions Director. One example was a letter from an applicant who admitted to having terrible grades but said, “My brain is fresh because I have not had to use it so far.”  A letter from a school described an applicant this way, “Under his flabby exterior is an enormous lack of character." He also got a letter from a mother whose son was not admitted saying, “The million dollars my husband was going to give to Princeton is now going to me, so thank you.” Wickenden also noted that the department denied admissions to more than half of high school valedictorians for reasons other than grades.

The next part of Mr.Wickenden’s presentation described seven admission stressors for student applicants:
Having dealt with the stressors on students who apply, Jim moved on to certain hopeful predictions. His first prediction and hope was that the terms “affirmative action and
diversity” will be replaced by the concept of “inclusiveness.”

His second prediction and hope was that standardized testing will continue to be used by the most selective colleges. Testing was originally created to help find talented kids who were not advantaged. Admissions departments need all the data they can get to make good decisions.

His third prediction and hope was that legacies and athletics will continue to play a role in admissions. Legacies play an important role for institutions. For example, Princeton raised $68 million in annual giving this year, an important contributor to the success of the university. He also mentioned that 19% of Princeton students participate in varsity sports, compared with 3% at some large universities. Academic standards for athletes should vary by sport.

The last section of Wickenden’s presentation had some possibly controversial recommendations for Princeton University. The first of these was to waive the application fee so that less advantaged students could afford to apply.

The second recommendation was to close the gap in students who apply by developing a five-year program with a prep year for first year students getting academic and other help to prepare them for the regular four-year program. Wickenden presented the idea of rating the sending school by average SAT scores to help close the gap.