​Five Myths about Nuclear Weapons:  Rethinking the Rationale for the Bomb
​
Ward Wilson
Senior Fellow of the Center for Nonproliferation Studies 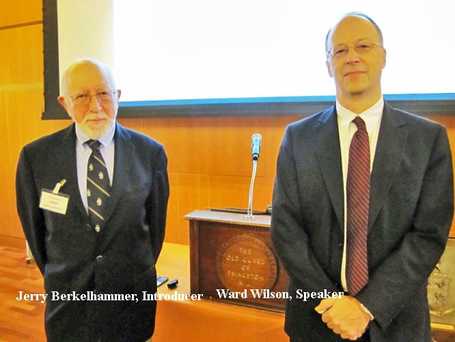 The parents of the speaker, George and Carolyn Wilson, were introduced as guests.

Gerald Berkelhammer introduced Ward Wilson who was born in Ohio, raised in Mercer County, attended Princeton High School, and graduated from American University in Washington DC.  Today he is a senior fellow of the Center for Nonproliferation Studies at the Monterey Institute of International Studies and is supported by a grant from the Norwegian Foreign Ministry dealing with nuclear weapon issues.  His new book, “Five Myths About Nuclear Weapons” goes on sale in January 2013. The title of his talk at this meeting was the same.

Mr. Wilson presented the five myths as follows:He addressed each of these myths.
He poses a fundamental challenge to these myths upon which American nuclear weapons policy has been built up over the last 65years. Those who propose the abolition of nuclear weapons have been deemed as being foolish, utopian dreamers. From a different perspective after re-examining the facts, the arguments for nuclear weapons are based on fear and rationalizations that are not powerful, but are preposterous. He states nuclear weapons are immoral, dangerous and stupid weapons that are too big, too outmoded, and too messy for any conceivable purpose. He believes our policies need to be rethought.

Member questions: addressed the appeasement of North Korea because it  has nuclear weapons; the issue of Iran acquiring nuclear weapons (like with Israel they will discover they are not very useful); how to prevent non-nation state terrorist organizations from using them (make them unavailable); what other currency of power could replace nuclear weapons (go from a hard symbol to a soft symbol as China is doing in Africa);