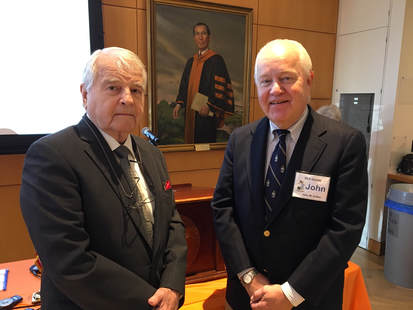 Minutes of the Ninth Meeting of the 77th Year

John Cotton introduced two guests, George Lambros, Chief Operating Officer of Worldwater & Solar Power,  and Nithila Peters, a writer who is including Quentin Kelly in an article for the Harvard Business Review. The total attendance was 103.

Mr. Kelly first established the need for his company’s mission: to bring clean water for drinking and irrigation to those in need, using solar energy. He quoted stark statistics: According to the UN, 40% of the world’s population, more than three billion people, will be without water by 2025. He said this lack of water is the greatest crisis the world faces in the 21stcentury. It will force large populations to move, causing disease, warfare, and death. Most of these people live in rural areas away from the grid of electric power needed to pump water from wells or to clean available dirty water so it is drinkable and can irrigate their crops. By providing systems that use solar power – plentiful in the at-risk areas in Africa, Asia, and South America -- to pump and treat water, Mr. Kelly’s company can help relieve this impending crisis.

He described the founding of his company in 1984: He and a few friends from Princeton University were invited to meet a representative from Sudan who asked if they could improve the water in his capital, Khartoum. Kelly and his friends went to Sudan and found a situation beyond their consultative help with any existing equipment. Outside of Khartoum, he also saw a hundred thousand refugees from Ethiopia dying without water. This experience motivated Kelly to find a way to bring water to those in need.

He recognized that electrical power was needed to pump water from wells, to purify brackish water for irrigation, to save these populations -- and that solar energy was the way to supply this electrical power to people far from electrical grids. Thus came the founding of Worldwater & Solar Technologies.

Kelly and his colleagues developed innovative technologies and techniques. Worldwater & Solar Technologies can drive 600 horsepower pumps from solar energy while his competitors max out at 50 horsepower. The company now has installations all over Africa, Asia, and South America. Worldwater & Solar Technologies has developed unique mobile purification units that are prized by, among others, the military, because they can be delivered by helicopter to remote sites. By providing the people of Sadr City, a district of Baghdad, with pure water, the populace was converted to “friendlies.” A unit in California allows one 1000-foot well to irrigate 400 acres of citrus without connection to the grid, and a unit south of Cairo, Egypt, is now allowing the desert there to produce abundant food.

With the falling cost of solar power (Forbes says solar energy is now one-quarter as expensive as it was in 2010), Mr. Kelly foresees replacing the diesel pumps presently used to irrigate 31 million acres in Africa with his solar-powered units, which are less expensive to run, more reliable, and non-polluting.

Kelly explained, with examples, how working with Third World countries can be challenging. Mr. Kelly told a series of stories – exciting, suspense-filled, and amusing – about trying to bring his company’s products to countries who needed it. The adventures ranged from Saudi princes “reforming” the government but cancelling much-needed help for Riyadh’s water supply, to stalling the Philippine’s President until the sun was high enough to demonstrate his unit, to placing a unit in rebel headquarters in Mindanao to help bring peace. That deals in Pakistan were reversed when the government changed did not faze Mr. Kelly, and his decision not to go to Peshawar on “Kill All the Americans Day” seems very reasonable. Signing the same agreements with the four concurrent Somali presidents, a.k.a. warlords, in Mogadishu sounded almost straightforward at this point, but being shaken down by his “bodyguards” for all the money he had before leaving – but borrowing money from them to fly away – did not.

Mr. Kelly ended his talk with a lighter tale: As a young man working at MGM he helped Grace Kelly take her clothes (from the movie High Society) to her home – quickly, as she had to attend the Oscars that night. So quickly, that the LA police chased and caught them, but as it was Grace, Queen of Hollywood, all ended well (except for his speeding ticket).
Everyone enjoyed this story as well.