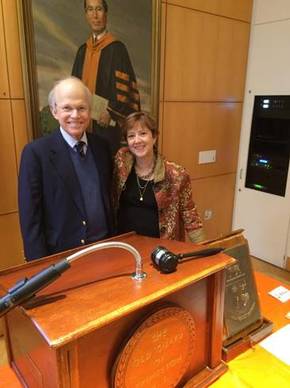 Landon Jones and Kathleen McCleery
Minutes of the Ninth Meeting of the 75th Year
President Jock McFarlane called to order the ninth meeting of the 75th year at 10:15 a.m., with 135 members in attendance in the Friend Center. Julia Cole led us in singing the invocation and Robert Ross impressed us with an excellent summary of Brett Bonfield’s discussion of “The Princeton Public Library and its Role in the Future of Libraries.”

It’s hard to imagine that the Old Guard could have been treated to a more informed summary of the 2016 election last week, within just a few hours of that upset being decided.  Our speaker, Kathleen McCleery, has not only had a long career as a television news producer but also has been teaching a course at Princeton entitled “Politics and the Media: Covering the 2016 Campaign.”  Also noteworthy in this context, she had earlier produced and directed a news program titled “On the Great Upset of ’48” about the 1948 Truman-Dewey election.  Finally, her preparation didn’t conclude until 3:30 a.m., as she monitored the television coverage and rewrote her Old Guard talk. Incidentally, she opined that, after last week, she will also have to rewrite the rest of her course syllabus.

Ms. McCleery began her talk with general remarks on the election: the turnout was huge, the vote count was remarkably close, the swing states were decisive and the exit polls indicated that people are angry; they were voting against, rather than for.

In terms of demographics, she reported that women supported Hillary Clinton 54 to 42 percent, while men supported Donald Trump 53 to 41 percent.  Also, the Clinton campaign had counted on the votes of blacks, Latinos and Asians, but didn't do as well with those groups as president Obama had done in 2012.

Turning next to people’s reasons for their votes: voting was pretty much along what Ms. McCleery called “tribalistic party lines” with 89 percent of Republicans voting for Donald Trump and 84 percent of Democrats voting for Hillary Clinton.

Next she gave some background on the embarrassing inaccuracy in most polls: for example:

So it seems that Donald Trump played the media well, even while abusing them, on one occasion calling a news team out as “dishonest swine.”   In light of a June Gallup Poll showing that only 8 percent of Americans have a great deal of confidence in television news and newspapers, that seems like a safe tactic.

According to one Associated Press interview, Donald Trump’s impolitic rhetoric also tapped into something that Americans wanted to hear – “honesty and straightforwardness.”

In her incisive closing analysis Ms. McCleery characterized this year’s campaign as one of the sleaziest ever.  Insults abounded, sexual assaults were daily fodder and the candidates’ spouses were slandered.   She sees that as part of a cultural shift in the way we Americans talk, the way we write and the way we interact with each other.  Lack of common courtesy and polite grammar gives license to Donald Trump, and all the rest of us, to say things we wouldn't have said in the public square earlier.  Similarly troubling is the polarization of the news media, where we select what we agree with, and rarely step out of our partisan wheelhouse.

Regretfully, neither of these seems like shifts that will be reversed soon.