The "New" Statue of Liberty
​and Other Projects in Historic Preservation 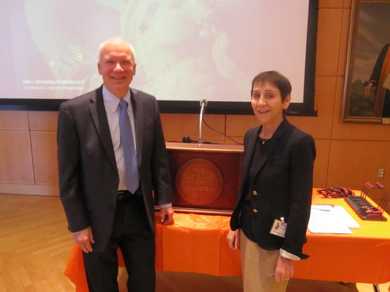 CALL TO ORDER: The Old Guard of Princeton’s thirteenth meeting of its 73rd year came to order.

MINUTES: Minutes of the December 3 meeting were read by Arthur Eschenlauer.
Copies of all minutes are available on the Old Guard website

ANNOUNCEMENTS:
Ed Weiss announced that Old Guard members Ken Gould and Paul Lyness had died and a minute of silence was held.
Don Edwards is retiring as Invocation Team Leader as he will be moving to the New Haven area to be near his family.
Julia Coale will be assuming Don’s responsibilities and would like to increase the number of invocation leaders so that the responsibility will come up about once a month.
Diana Crane, our historian, reports that minutes from spring 1982 through fall 1982 are largely missing from the materials provided to the Princeton Historical Society. If any members have records of the speakers during that period, please contact Diana.

Introduction of the speaker was by Marge D’Amico.

THE ‘NEW’ STATUE OF LIBERTY
In 1886, The Statue of Liberty Monument was given to the United States by France to celebrate friendship between the two countries. Over the years it has symbolized the freedom and democracy of the United States.

Frederick Auguste Bartholi designed the Statue together with Richard Morris and Alexandre Eiffel. The latter provided engineering assistance to insure that the Statue stood upright. The framework was constructed and erected in Paris on a trial basis before being transported to the US.

The Statue was placed within the existing star-shaped walls of Fort Hood on what was then known as Bedloe’s Island in the New York City harbor, and later renamed Liberty Island.  In 1933 President Franklin Roosevelt deemed the monument to the care of the National Park Service.  In 1965 Ellis Island was transferred into the National Park Service and became part of the Statue of Liberty Monument which included the Museum of Immigration.

President Ronald Reagan announced in 1982 that he wanted to restore the Statue as the harsh environment of the harbor had taken its toll.  The Park Service agreed to a public/private partnership that was headed by Lee Iacocca.  This eventually became the Liberty Ellis Island Foundation.

Michael Mills’ architectural firm, Mills and Schnoering, was assigned the task of renovating and updating the Statue in 2009 – a job he considered to be the most challenging project of his career. The goal was to improve visitor safety and navigation and to insure compliance with current safety codes. Improvements had to include better access and egress; replacement of the hydraulic elevator because its fluid was flammable and a fire hazard; enclosed fire stairs; smoke separation between the statue and the base; a smoke exhaust system; a new emergency elevator that went from the base to the shoulder so that if there were a medical emergency assistance could be provided; handicapped bathrooms; fire alarms; energy efficient interior and exterior lighting; and a complicated system of up and down staircases that needed to turn at 90 degree angles and pass each other at the same time  – all of which had to be executed within  the very tight interior  limitations while not touching any of the original design.

The massive tie-downs within the statue, put in place to resist the high winds in the harbor, had to be snaked around, and intricate 3-D models were essential to help construct the final staircase design.  With 7 levels in the base of the structure and 9 more levels up to the shoulder, this was a massive undertaking.

We saw many amazing photographs and schematics of both the interior and exterior – some of them historic - and many illustrating the creative interior staircase solution.

Other challenges included security – dogs were on-site to inspect parcels that came onto the island. Originally it was thought that there would be a concrete plant built on the island, but it was determined that it would be easier to transport over concrete loaded trucks on barges.  We saw photographs of the barges being lifted out of the water by hydraulic lifts so that the trucks could move off into the various construction sites around the base.

The restoration was completed in time for the 126th anniversary on October 28, 2012, with many dignitaries present at the ceremony.

Unfortunately, Super Storm Sandy hit the very next day, on October 29, and wreaked havoc on the East Coast. Liberty Island suffered serious damage to perimeter walkways, docks, piers, railings, and electrical systems, but the Statue was not seriously damaged. The island was closed for approximately one year afterwards and re-opened again on July 4, 2013.

The Statue was declared a World Heritage Site by the United Nations in 1984, one of only 9 such cultural sites in the US. It is visited each year by hundreds of thousands of visitors.