​Evan Thomas
Author and Journalist
​
in conversation with 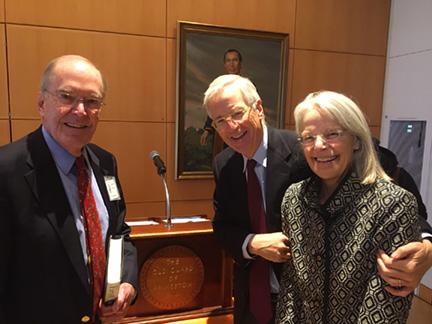 Minutes of the 13th Meeting of the 78th Year

President Julia Coale called the meeting to order at 10:15 AM.  The invocation was led by Joan Fleming and the minutes for the previous meeting were read by Ralph Widner. There were 129 in attendance. Two members introduced guests as nominees: Lois Shindelman – Donald Barrack; George Bustin – Richard Lewandowski. Ten other guests were in attendance but were not introduced as Old Guard candidates. A moment of silence was observed in memory of Mosie Gates.

Michael Matthews introduced Evan Thomas and his wife, Oscie, to talk about their book, First: Sandra Day O'Connor. Although Evan, a well-known author and journalist, is listed as the author, the acknowledgements in the book and the ensuing conversation emphasized that Oscie was a major contributor as researcher, co-interviewer, and much more.

When Sandra Day O’Conner was nominated to be the first female Supreme Court justice by Ronald Reagan in 1981, her confirmation hearings drew more requests for press passes than did the Watergate hearings and attracted large TV audiences. She was confirmed by the Senate with a 99-0 vote. Despite the overwhelming support, she continued to be subjected to many of the slights aimed at women entering a man’s world.
Sandra Day O’Conner was not bitter, she did not let discrimination stop her from retaining her independence, she learned to deal with obnoxious men, and she often became a unifying force on the Supreme Court. The authors cited many examples of these characteristics. Here are a few: The authors also related Sandra Day O’Conner's life after she left the Court, including her work to promote the teaching of civility and civics, as well as caring for her husband after he contracted Alzheimer’s disease.

Following their remarks, there was a wide-ranging Q&A session with questions covering: Bush v. Gore; Sandra Day O’Conner's relationship with Ruth Bader Ginsberg; and, whether there was a feminine approach to the law, a concept with which she disagreed.