​Parties, Politics, and Power:
The Presidency of Thomas Jefferson 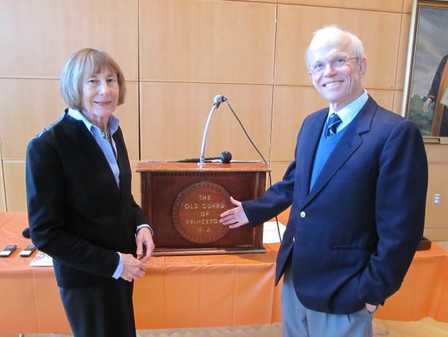 Barbara Oberg, Speaker, and Landon Jones, Introducer
Minutes of the 11th Meeting of the 71st Year
Ruth Miller, President, called the meeting to order at 10:15.  Don Edwards led the invocation and Alison Lahnston read the minutes of the meeting of December 5, 2012. Guests were introduced, Ms Miller announced upcoming meetings and Jack Reilly announced an election of new members  to be held on January 9, 2013.

Landon Jones introduced the day’s speaker, Barbara Oberg, General Editor of the Papers of Thomas Jefferson at Princeton University. Dr. Oberg received her undergraduate degree from Wellesley and her MA and PhD degrees from UC—Santa Barbara, specializing in early U.S. history.  Before joining Princeton, she edited the papers of Albert Gallatin at Baruch College and the papers of Benjamin Franklin at Yale. The Princeton project began in 1943 and to date has published 39 volumes. Dr. Oberg has been studying the Jefferson papers for eight years and is currently working on the summer and fall of his 1803 presidency.

In her presentation today, Dr. Oberg dwelt particularly on Jefferson’s relations with his cabinet.  Unlike [Washington] and Lincoln, Jefferson chose cabinet members with points of view similar to his own.  Moreover, he consulted with them frequently and mostly in writing. Cabinet meetings were held only for the most important subjects. Notes of these meetings were taken by Jefferson himself.  The views of each member were sought and recorded.  Jefferson usually made the final decision, but not always.  Sometimes urgency and distance required that several cabinet members decide an issue in the absence of the president. A decision concerning the Barbary States was given as an example.  More typical was the flow of paper connected with the president’s Annual Message to Congress. Dr. Oberg counted eleven exchanges among the president and his cabinet before one such message was completed.  Historian Joseph Ellis called Jefferson’s “the textural presidency.”

One of the hallmarks of Jefferson’s presidency was the Louisiana Purchase. It illustrates the care given by the president and his cabinet to the many nuances considered leading up to the purchase and the related “voyage of discovery,” and, as well, the need to act quickly lest Napoleon change his mind.  Initially, Jefferson felt that the purchase would require a constitutional amendment and, indeed, a proposed amendment was drafted.  [It was later decided that a treaty with France, followed by approval by the Senate], would accomplish the purchase while also obtaining the imprimatur of Congress.  As mentioned above, was also closely involved in planning the Lewis and Clark expedition, preparing a list of more than 35 questions he wanted the explorers to consider.

Jefferson worked 10-13 hours a day, much of it writing and responding to mail received from his cabinet and others. He disliked face-to-face confrontations, but did arrange many small congenial dinner parties that dealt with specific subjects. In this environment, Jefferson’s aloofness was replaced by his natural charm and his ability to persuade. Characteristically, a record was kept of all of these gatherings, including the number of bottles of champagne consumed. Sometimes his daughter and granddaughter attended.  In this way, according to presidential author James Burns, Jefferson “humanized the presidency.”