Fear and the Safety Net:
Evidence from Secure Communities 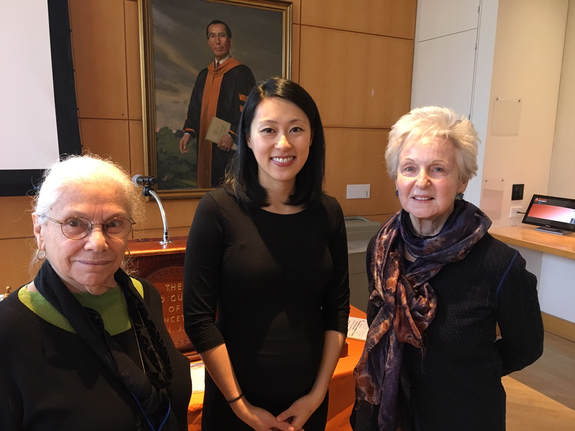 Minutes of the 13th Meeting of the 77th Year

Associate Professor Crystal Yang’s presentation to the Old Guard was based on empirical studies that she designed and carried out with Marcella Alson, an associate professor of medicine at Stanford University School of Medicine. Both women are interested in conducting research based on observation and experiment to test hypotheses related to social justice issues and, more specifically, to criminal law, healthcare, and economics.  Their studies - and Yang’s talk - focus on the federal enforcement program denominated Secure Communities (SC) and its impact on participation by Hispanic citizens in two assistance programs for low-income residents in the United States, the Supplemental Nutrition Assistance Program (SNAP)  and the Affordable Care Act (ACA).

Yang began with the “motivation” for the hypothesis examined by the authors. They had observed what they call “incomplete take-up” by Hispanic citizens in regard to public welfare programs, which is a way of saying that, despite the substantial benefits of participation, Hispanics are less likely than either African Americans or Caucasians to seek assistance from either SNAP or the ACA. Further, based on evidence that kinship affects both savings behavior and welfare applications, and on studies that support the importance of subjective beliefs in decision making, Yang suggested that fear and social networks may explain the reluctance of Hispanics to apply for SNAP or ACA benefits. It is this “motivation" that leads to the hypothesis to be tested by the authors, that is, “whether immigration enforcement affects participation in ACA and SNAP among Hispanic citizens.”

By way of background information and to provide markers for examination of this question, Yang presented a short history of the SC program. Prior to SC, the fingerprints of persons arrested and booked by local law enforcement were sent to the FBI, which then would conduct criminal background checks and send the results back to state or local officials. Non-citizens were identified through inmate interviews that could, but often did not, result in the issuance of detainers.

With the advent of SC under Presidents George W. Bush and Barack Obama, fingerprints were also sent to the Department of Human Services (DHS) and Immigration and Customs Enforcement (ICE) personnel. Those agencies had access to additional data bases and were able to put together more extensive criminal histories, thereby increasing the probability that arrested immigrants would be detained and removed. Although, in 2014, under President Obama there were attempts to rationalize and limit the use of detainers, when President Trump took office, he reenforced the SC program and, by executive order, gave the attorney general the power to withhold federal monies from sanctuary cities, i.e., jurisdictions that, among other things, disregarded detainer orders.  It is in this context that the two fastest growing means-tested federal assistance programs, the ACA and SNAP, required applicants to provide information that would uncover illegal residents who were family members and/or part of the Hispanic social network. Based on this history, Yang and Alson developed the hypothesis that fear of exposing a brother or an uncle, or any member of of the group, to incarceration and deportation prevented Hispanic citizens from applying for the assistance they needed.

Using data obtained through Freedom of Information Act requests to the DHS and to ICE, and mining a variety of reliable governmental and other data sources, i.e., the Centers for Medicare and Medicaid Services (CMS), Yang collected information about the percentages of  eligible Hispanic citizens who applied for ACA and SNAP program benefits as compared to the percentage of other eligible groups who applied. She also considered the activation of SC, which occurred at different points across the country, and compared counties with heightened ICE enforcement to counties that had not yet been activated, finding that more intensive enforcement was correlated with a steady reduction in Hispanic participation. Most importantly, the researchers used estimation strategies that took into account non-random events and controlled for “shock” effects. The results they obtained are statistically robust, both for ACA and for SNAP, and support Yang and Alson’s conclusions:
Respectfully submitted,
Deborah Poritz