December 13, 2017
​
Laugh Lines:
Talking Funny With the Cartoon Editor
Of ​The New Yorker 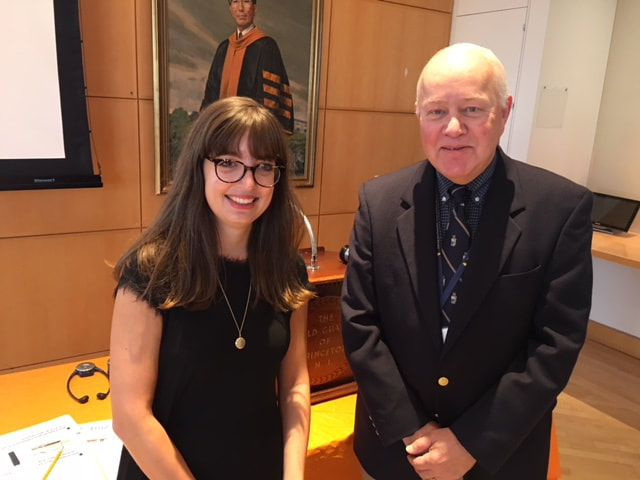 President Jock McFarlane called the meeting to order at 10:15 a.m. The invocation was led by Roland Miller, and Deborah Poritz read her minutes of Elizabeth Paluck’s Dec. 6, 2017, talk, “Why Social Norms Matter.”

A multitude of guests was acknowledged and welcomed en masse.

The meeting was attended by 149 people.

Early in the proceedings, it was acknowledged that many so-called New Yorker readers actually peruse it primarily to find and enjoy the cartoons, reserving the text for a later date of manifest uncertainty.  No doubt that accounted for a near-record Old Guard attendance.

Our speaker, Ms. Allen, noted that each of the 15 or so cartoons in any issue is sui generis in nature, the only common denominator being that they are contained in a single issue.  Ms. Allen’s presentation was somewhat congruent with this concept, as she offered a variety of rather independent observations, ranging from how she got the job, to her lack of involvement in The New Yorker’s cartoon caption-writing contest.

Among the points in her remarks:

A relative youngster (especially relative to her audience), she said her younger-generational familiarity with emerging media was a reason for her appointment not only as cartoon editor but also as leader of The New Yorker’s expansion into forms of media reaching diverse audiences beyond its traditional clientele.

Among the innovations are an online feature called “Daily Shouts” (which she described as a “dumping ground” for material deemed unworthy of booking passage on the mother ship).  Cartoon lovers could take comfort in knowing that each day’s “Daily Shouts” includes one timely and topical cartoon.

But the main feature of her job is winnowing through a tsunami of 1,000 cartoons submitted to her weekly by the 100 regular contributors upon whom the magazine relies.  Some 940 of those submissions are immediately dismissed, leaving another 60 or so from which they select the eventual 15 that will be published in the week’s issue.

She declared that there is no formula whatsoever by which goodness in a cartoon is immediately recognizable.  She does favor an element of “surprise,” and dissuades wannabe cartoonists from any effort to discern and ape what successful New Yorker cartoonists seem to be doing right.  Beyond that, it would appear that her criterion is akin to that of Supreme Court Justice Potter Stewart’s 1964 declaration regarding hard-core pornography: “I know it when I see it.”

Ms. Allen described the perilous journey of carrying each cartoon across the minefield of copy editors and fact-checkers at The New Yorker (a process brilliantly detailed, by the way, in John McPhee’s latest book entitled “Draft No. 4”).  Despite their best efforts, she reported that they were unable to determine whether there was a coat rack at the Last Supper nor, it seems, to have detected the possibility that a cartoon caption adverting to “the jaws of lunch” might indeed have borne a typographically distorted reference to “the jaws of life.”  But the latter is understandable in light of the sometimes oblique or actually indecipherable meaning of certain New Yorker cartoons.

Ms. Allen concluded by noting that her friends erroneously assume that she must spend her working hours in stitches as she pores over the thousand cartoons submitted each week.  Clearly, she declared, they are not taking into account that 940 of them actually aren’t good enough to publish.

Among the responses prompted by questions from the Old Guard audience:


Because Ms. Allen displayed remarkably few New Yorker cartoons, any unmet yearnings will be rectified by this description of your minute-taker’s personal favorite:

A supremely distinguished-looking gentleman in a bespoke three-piece suit replete with Homburg is looking down with disdain at a haberdasher’s display of shirts.  He intones, “One supposes that if Father and Mother had wished for me to wear the monogram of Yves Saint Laurent, they would have named me Yves Saint Laurent.”