A Walk in Time:
​Pilgrim on the Road to Santiago 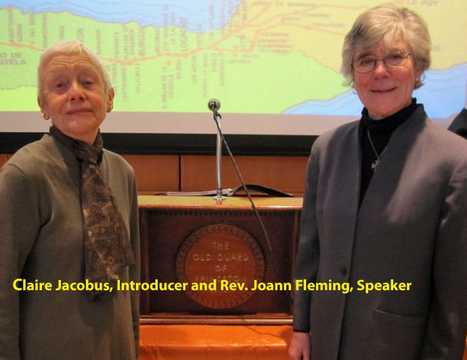 Minutes of the 13th Meeting of the 70th Year
President Robert Varrin called the meeting to order at 10:15 a.m. in the Friend Center, this being the 13th meeting of the 70th year. The attendance was 89.
Don Edwards led the invocation.
The minutes of the December 7 meeting were read by Harvey Rothberg.
There were many guests. The Reverend Joan E. Fleming, the day’s speaker, introduced several members of her family and close friends: John Fleming, Luke Fleming, Susan Saltrick, Ruth Thornton, and Melanie Dean.  Several spouses of members of The Old Guard of Princeton were introduced:  Jean Frederick by John Frederick, Anne Seltzer by Mitch Seltzer, Mea Kaemmerlen by Al Kemmerlen, Dick Fenn by Juliana McIntyre, Sally Edwards by Don Edwards, and Mary Giordmaine by Joe Giordmaine. Rosemary O’Brien welcomed her daughter, Anne Bauer.

Claire Jacobus introduced the speaker, The Reverend Joan E. Fleming, Rector Emerita, Christ Episcopal Church, in New Brunswick.  After a career in teaching and editing, she took Episcopal orders in 1986 and retired in spring 2004.  In October 2004, she became one of a select group to become the first female members of The Old Guard of Princeton.

The Reverend Fleming titled her talk, “On the Camino de Santiago – A Walk in Time.”

The Camino de Santiago, or the Way of St. James in English, is the pilgrimage route to the Cathedral of Santiago de Compostela in Galicia in northwestern Spain.  Tradition has it that the remains of the apostle Saint James are buried there.  Over centuries dating back to the 800s, millions of pilgrims – starting from one of four major places in France – have made this journey.

The talk was divided into segments describing the history of the pilgrimage, the practicalities of the trip, the geography and the people met on the walk, and – for want of a better word on this writer’s part – the essence of the experience. Slides illustrated the talk and brought it to life.

During the Middle Ages, pilgrims undertook the journey for devotional purposes, such as to pray for health or to do penance.  Waking the Camino was also billed as an effective way to earn time off in Purgatory either for oneself or for others. Neither Saltrick nor The Reverend Fleming admitted to falling into this last category

In order to prove that one has made the journey today, a “passport” is bought and stamped at hostels along the way.  At the end of the journey, one presents the “passport” and is given a completion certificate.

The scenery throughout the walk – as especially evidenced by the slides – is spectacular at some points and quietly tranquil at others.  At one stage, The Reverend Fleming noted, there were nine beautiful miles of a glossy canal, with uniform trees lining both sides and reflected in the stillness of the water.  That was a wonderful day, she said.  It helped, of course, that the path was flat. Other days were more arduous – particularly those spent crossing the Pyrenees.

Religious artifacts as well as old churches and monasteries dotted the entire journey.  There was even an ancient Roman causeway or two.  “We saw,” The Reverend Fleming said, “monuments to the rise and fall of civilizations.  There was a fortress built by the Goths and then alternated for centuries between Christian church and Muslim mosque.”

Nights were spent in hostels or in private homes run as Bed and Breakfasts.  There, the two walkers enjoyed meeting fellow travelers or learning about the lives of the many, exceptionally hospitable people who live on the Camino itself.

During the question period, The Reverend Fleming said that it was astonishing to learn how many different nationalities were undertaking the trip.  At one hostel, she counted people from 25 different countries.

It also became clear that it was not a completely ethereal experience.  The end of each day was not spent in spiritual reflection but rather in deciding how to fix sore feet as well as where to get a meal, contemplating how bad the snoring would be in the hostel, and hoping that personal laundry would dry overnight.

Nevertheless, to walk an ancient route such as the Camino, The Reverend Fleming explained, is to walk in the centuries’ old footsteps of those who have trodden it before.  In tracing their steps, one is touching time long past in a strangely intimate and personal way.

And, she concluded, the walk has whetted her appetite for more such trips, trips that are filled with geographical beauty and permeated with history while allowing one to meet and enjoy so many different people -- and to keep creeping arthritis at bay.