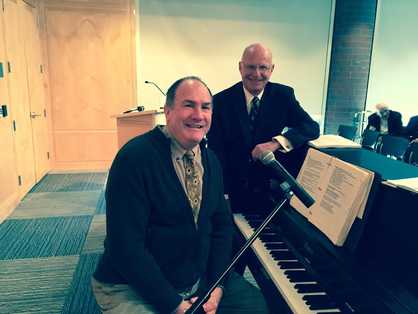 Fred Miller was introduced by Henry Von Kohorn, who has known him for 37 years.

As a boy, Mr. Miller, a native of Albuquerque, N.M., became an accomplished pianist playing and loving classical musical. But as he reached adulthood, he became inspired by the Great American Songbook and introduction of songs that are a reflection of our American culture.

To date he has produced over 71 “Lectures-in-Song” reflecting different composers and lyricists including Gershwin, Porter, Berlin, Rogers and Mercer. His six era programs deal with episodes in American history. Included in each are the movies theater, current events, best sellers and personalities, examples of which he has captured in song.

Today’s program covered the years from 1938 through 1945. We were taken on a sentimental journey from 1938. A selection included “I’ll Be Seeing You” and “Flat-Foot Floozy” and “Two Sleepy People” and “Thanks for the Memories.”

In 1939, the Big Bands became popular, with Glenn Miller and “Moonlight Serenade.”

In 1941, the United States was attacked at Pearl Harbor, Cheerios was introduced, Judy Garland and Mickey Rooney were big stars and popular songs were “Moonlight Cocktail” and “I Love New York in June.” And, sadly, we say the fall of Paris to the Germans.

1942 saw Bing Crosby, Dorothy Lamour and Bob Hope on “The Road to Morocco” and we all sang “White Christmas.”

1944 brought us gas shortages, Judy Garland sang of “The Boy Next Door” and the trolley and Doris Day took that “Sentimental Journey.”

1945 marked Iwo Jima, Arthur Godfrey became a celebrity, Shirley Temple married at 17 and the war was finally over.

During the question and answer period, Mr. Miller was asked what song was his favorite. His reply was: whatever one he was singing at that moment.
​
Respectfully submitted,
Rhoda Wagman