#BlackLivesMatter in Comparative Perspective:
​What Does it Mean in Latin America
​
Tanya Hernandez
Professor of Law, Fordham University, School of Law 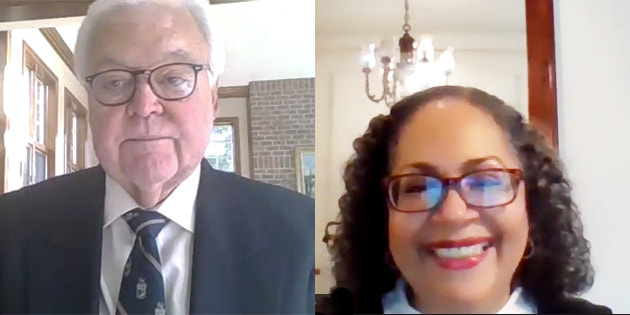 George Bustin, Introducer, and Tanya Hernandez
Minutes of the 12th Meeting of the 79th Year
President Stephen Schreiber called the meeting to order at 10:16 AM.  Welmoet van Kammen read the minutes of the previous meeting. President Schreiber welcomed two guests: Christine Danser brought Judy Funches and George Bustin brought Acati Johnson. There were 132 members viewing via Zoom. President Schreiber acknowledged and thanked the Program Committee for their efforts to provide us with such a creative and varied program schedule.

George Bustin introduced the speaker, Tanya K. Hernandez, Archibald R. Murray Professor of Law, Fordham University School of Law. She received her A.B. degree from Brown University and her J.D. from Yale Law School. Professor Hernandez is an internationally recognized, comparative race law expert. Her articles on race and culture have been published in the law reviews of Cornell, Harvard, Yale, New York University, and the University of California at Berkley. She is the author of several books on racial discrimination and multi-racial civil rights.

Professor Hernandez began by telling us she had returned to her roots in Harlem, NY, where she grew up as the child of a Puerto Rican mother and Cuban father. Her mixed cultural and racial background growing up were key influences in formulating what she called her bifocal view of race in the world. Her neighborhood left her with two ideas: first, the belief that Latinos saw themselves as enlightened as a race, being racially and culturally mixed and never having suffered the burdens of slavery; second, the lack of emphasis on blackness as a point of difference.

In describing racial bias perceptions in Latin America, she pointed out that, sociological studies to the contrary, the belief that racism is non-existent is pervasive among Latin Americans.  Because they are made up largely of persons of indigenous creole or mixed origin, maintaining this mixture makes them non-racist, especially in comparison to the United States.  Calling this “racial innocence,” Professor Hernandez opined that rather than a racial democracy, Latin America was more of a “pigmentocracy,” a social order organized by skin color, with increased degree of darkness being a negative factor.

Looking deeper at the impact of this pigmentocracy, Afro-Latinos make up 40 percent of the poor. Citing examples from many countries including Peru, Brazil, Ecuador, and Uruguay, Professor Hernandez described how racial labeling is based on how closely one conforms to the characteristics of the African race. Favoritism is evident toward light skinned and mulatto Latinos. These attitudes play out in politics, business, and academia. Particularly in the area of employment and career advancement, Afro-Americans lag behind, even in jobs where education is not a requirement. Afro-Latinos hold jobs where salaries are as much as 60 percent below those of lighter skinned workers. In many places, Afro-Latinos are forced to resort to drug dealing or sex trade to achieve higher wages. Most darker-skinned workers are relegated to menial, low paying jobs, such as porters and security guards, or to temporary jobs. Even the relatively small Afro middle class has been mostly limited to government-sponsored jobs. Women, in particular, have been ignored and discriminated against in employment practices with many employers reluctant to hire darker skinned women. Women seeking domestic service jobs are forced to enter into contracts, sometimes verbal instead of written, which are unfavorable to them and violate national labor laws.
​
Professor Hernandez concluded by saying that this racial ignorance and business-as-usual approach is why she wrote her most recent book, Racial Subordination in Latin America: The Role of the State, Customary Law, and the New Civil Rights Response. In the book she attempts to analyze all this data and cut though the racial innocence and denial that exist among Latinos. And while there is a preponderance of negative data cited, she purposefully pointed out that the good news is that continued communication and idea sharing throughout Latin America and the United States is focusing on anti-bias laws and speaks to improved social justice movement.