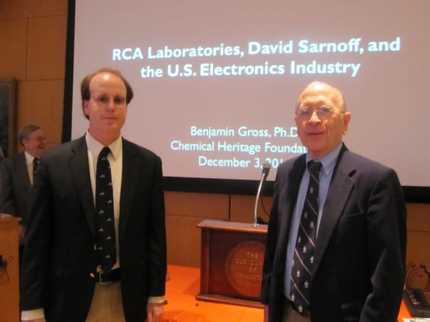 Benjamin Gross, Speaker, and Jock McFarlane, Introducer
Minutes of the 12th Meeting of the 73rd Year
President Owen Leach convened the meeting with 119 in attendance including 15 formerly associated with RCA.  Julia Clark led the invocation, and Eleanor Horne read the minutes. There were no guests.

Jock McFarland introduced Benjamin Gross, Research Fellow at the Chemical Heritage Foundation, where he focuses on the American electronics industry. In addition, Mr. Gross heads a program to organize and preserve the Sarnoff Collection at College of New Jersey.  He holds a BA degree in history from Yale, and a PhD in history of science from Princeton.

The talk was entitled: RCA Laboratories, David Sarnoff, and the U.S. Electronics Industry.

While our electronics industry today is concentrated on the West Coast, it got its start in the East, and principally in New Jersey, where Edison’s laboratories, Bell Labs, the Weston Instrument Co., Lockheed Electronics, and the US Army Signal Corps constituted a research nucleus, and Radio Corporation of America dominated consumer electronics.

Behind RCA was David Sarnoff. Born Jewish in Belarus in 1891, he arrived age 9 in New York. At 15 he had to work full time because of his father’s illness, becoming a telegrapher at the Marconi Wireless Telegraph Co, which had a library where he taught himself the math and physics he had missed at school. His radiotelegraph reporting on the sinking of the Titanic in 1912 helped dramatize the importance of radio; in the same year Congress required the licensing of radio operators.

In 1916 Sarnoff proposed that Marconi enter broadcasting as we know it, in addition to their two-way radio operations, but this was put on hold during war-time.

World War I showed that the US must have complete control of its radio system, so, at the suggestion of Franklin Roosevelt of the Navy Office, all corporate radio patents were placed in a new holding Company: Radio Corporation of America, and David Sarnoff went in along with Marconi’s patents.

At RCA he rose fast, and in 1929, as Executive VP and rankled by RCA’s lack of autonomy and manufacturing capacity, he arranged the purchase of the Victor Talking Machine Co. and its concomitant trade marks and Camden, NJ manufacturing and research facilities.  For the rest of his career Sarnoff put research first at RCA.

Since 1923 RCA had been working on television, and in 1928 they teamed up with Vladimir Zworkin, holder of the patent for the picture tube. Expecting to commit four men and $100,000 to the project, RCA spent 50 million Great Depression dollars getting to David Sarnoff’s announcement at the 1939 World’s Fair that RCA would begin black and white television broadcasting.

The next year RCA bought the Princeton area site of its centralized research facility, RCA Laboratories.  Wartime efforts of RCA were directed especially toward radar, sonar, infra-red optics, and the like.  Meanwhile General Sarnoff was directing communications for the D-day invasion.

Postwar, black and white TV burgeoned, and Sarnoff instigated a crash program to develop color TV that would be purely electronic and receivable over black and white sets.  When color was introduced in 1953, the high cost of color sets to replace still fairly new black and white ones along with sparse color broadcasting led Time Magazine in 1956 to label color TV “an industrial flop”.  But RCA doubled down and by the early ‘60’s had a cumulative gain from its $130 million color TV project.

Sarnoff’s paradigm had been research as a self-supporting activity:  create patents, license them, and spend the royalty payments on more research.  By 1958 this had become so successful that it drew anti-trust fire; so RCA was forced to stop charging for the use of its radio and TV patents.  Research emphasis was placed on applications of solid-state transistors to replace vacuum tubes with their heat, bulk, fragility, short life, and energy intensity; and also on integrated circuits, charge-coupled devices, light-emitting diodes, and liquid crystal display technologies.

Upon David Sarnoff’s retirement in 1968 leadership passed to his son, Robert, who lacked David’s discipline, practical wisdom and clarity of mission.  From then to Robert’s ouster in 1975 there were several major misfires:  the conglomerate adventure (“Rugs, Chickens, and Autos”); the quarter billion dollar write-off of the effort to gain second place in computers; and hundreds of millions of dollars written off on the failed vinyl video disk effort done in by videotapes, the DVD, and rentals.

Finally, GE took over RCA in 1987, ceding the Laboratories to Stanford Research institute.

The legacy of David Sarnoff, RCA, and RCA Laboratories is the model of integrating the Board Room and the research laboratory, now so successful in Silicon Valley.  But it was developed in New Jersey.

It came out in Q & A that RCA’s policy of licensing overseas manufacturing by others contributed to the early Japanese dominance in consumer electronics. Also, that the precipitating event in Robert Sarnoff’s ouster was his round-the world trip with his wife, opera diva Anna Moffo, at a time when the Board wanted a credible corporate plan for RCA instead.