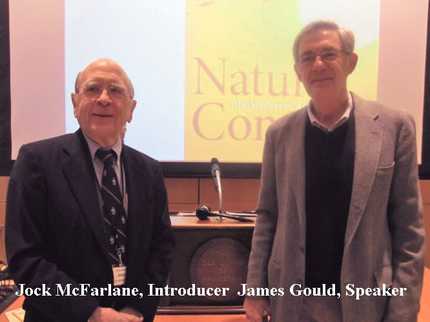 Minutes of the 12th Meeting of the 72nd Year
The 12th meeting of the 72nd year was called to order by President Ruth Miller. The invocation was led by Julia Coale.  Minutes of the previous meeting written by Tim Fulmer were read by Arthur Eschenlauer. Bob Pickens was welcomed as a new member. Two guests were introduced; Patti Daley by her husband Eliot, and Mea Kaemmerlen by her husband Al. President Miller reminded the executive committee of this day’s 1:45 PM meeting in the Nassau Club’s Gun Room. She also announced next week’s December 11th meeting would be held in the Carl Fields Center.

Jock McFarlane introduced James Gould, Professor of Ecology and Evolutionary Biology at Princeton University. This was the third Old Guard appearance by Professor Gould spanning over 37 years which may be a record and reason to thank him for his long standing support of our organization. He graduated from Cal Tech and received a PhD from Rockefeller University in animal behavior. A member of the Princeton University faculty since 1975, he has risen to the rank of Professor in the Department of Ecology and Evolutionary Biology. He has contributed many scholarly articles and books in his field, many of which he has co-authored with his wife Carol Grant Gould.  One such book was the title of this meeting’s topic, “Nature’s Compass.”

Opening with the 1621 sailing ship “San Antonio’s” grounding and sinking in Bermuda, caused by inaccurate navigation, he introduced how certain animals successfully meet the challenge of long distance navigation. He outlined four navigational methods used either singularly or in combination by a variety of animals: 1, vector navigation; 2, piloting; 3, inertial navigation; and 4, animal maps.

1. Vector navigation is illustrated by red eyed vireos born with an innate compass directing them to their winter grounds. These innate compass directions are so fixed that birds transplanted to the opposite side of the United States follow their programmed compass vector and become lost.

2. Piloting navigation uses memorized landmarks to guide movement. Geese and whooping cranes have a memorized a route learned by being guided by their parents. If for some reason parents do not migrate, their off spring do not learn the route and remain in one place.

3. Inertial navigation does not use landmarks but keeps track of each leg of the voyage to plan future trips. This is also called “dead reckoning,” often appropriately named as the sailing ship San Antonio found out too late because it had not allowed for current drift.  Forager honey bees memorize flower location, the surrounding landmarks, as well as the direction and distance of each leg of the route taken in relation to the position of the sun. Upon returning to the hive they transmit this information to other bees by dance and wiggles. Figure of eight dances indicate the direction of each leg of the trip and a specified number of body wiggles measures the distance of each leg. Using this information other bees follow the same path to the food source.

4. Animal maps or true navigation is found in certain creatures that know where they are in the globe and have the knowledge on how to get to a distant location. This skill is multi-generational, for example, in Monarch butterflies that take several generations to complete their long U.S. – Mexican round trip.

Bar-tailed gowits migrate to the South Pacific abandoning their offspring in Alaska. When ready to fly, the offspring, use their innate map sense, to fly thousands of miles over open ocean to their destination. They possess a map sense much like we use the global positioning system to know their location.

As to the future he is not as concerned about global warming affecting migration because historically animals have adapted to previous climate changes. He feels the real concern is loss of habitat along the migratory path.  He quoted a colleague, “Migration is an act of faith; a hard wired belief that there is somewhere to go and a way to get back.”

Questions asked:
Will a change in the earth’s polarity have an effect on migration? Yes, the poles migrate and occasionally collapse and animals need to adapt. Let’s hope it does not happen too soon.

Do bats use their transmissions to find their way home? Yes, they use magnetic and star compasses. But once they map an area they become lazy, rely on their memory and fly directly into new objects.

Do magnetism as well as magnetic fields have anything to do with migration? Yes.  Princeton’s great contribution was the discovery of magnetized granules in animals that use them for navigation. Some animals use the pigment cryptochrome located in the nose or ear as a compass.

Why are monarch butterflies attracted to a specific site in Mexico? It has cool air, moist rain forest, and has lots of trees. Not all monarchs go to Mexico; some go to California, but most of the monarchs we see around here go to Mexico

Does your work deal with the problem of hive collapse? He questions whether or not there is a problem. There are no records comparing the number of hives in the past or present. He has seen hives come and go over the years. Although he is impressed with the numerous speculations as to the cause including use of cell phones.

How does the monarch fuel the long flight across the Gulf of Mexico?  It remains a mystery. It’s magic.

Why are humans unable to migrate over long distances? We evolved needing to be good at local area navigation and there have been little evolutionary selective pressures for long distance travel.

Is anything being done to protect God’s forty little acres (Mexican monarch habitat)? Yes, it was made a national park, but trees continue to be logged and the butterflies are used as cattle feed. It remains endangered.

Have you studied elephant migration? No, but he described how low frequency hearing assists them.

The Meeting adjourned at 11:30

Following the professor’s talk, I encountered an international tour bus discharging on Nassau Street. One tourist stopped me pointing at a Princeton University brochure obviously asking for directions. As verbal communication was impossible I thought I would use the non verbal communication just discussed by our guest speaker. Attaching the foreign tourist’s hand on my shoulder I danced in a figure of 8, ending facing south and using “the twist” skills wiggled 6 times indicating he should travel 100 yards to the south. (Pause)

​He didn’t get it.  Oh well, what could you expect?  He was only human.