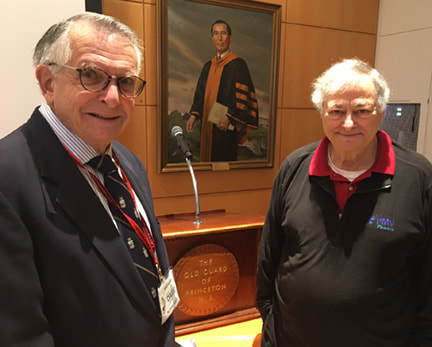 Minutes of the 12th Meeting of the 78th Year

David Atkins introduced the speaker, Professor Emeritus Arnold Levine, from the Institute for Advanced Study. A widely acclaimed leader in cancer research, he is a co-discoverer of the suppressor protein that inhibits tumor development. Prior to his tenure at the Institute, which began in 2011, he served on the faculty at Princeton University and on the faculty and in administration at Rockefeller University and Stony Brook Medical Center.

Combining his own expertise in evolutionary biology with an audacious sweep of humankind’s history in three books by the Israeli historian, Yuval Noah Harari, he capsulized a provocative review of the human past with a disturbing prognosis for the future.

Over the course of 3.5 billion years, a chain of four nucleic acids that go by the initials “ACGT” provided the design template for the many proteins that have been the building blocks for every organism on the planet. That chain defines what each organism can do, how long it will live, and what will be passed on to the next generation. Whether this shared algorithm sprang from single or multiple sources, or whether this is the only way life can happen we do not know, so we’ll have to journey to Mars or other worlds in order to find out.

Between 300,000 and 200,000 years ago, our species, Homo sapiens, emerged somewhere in the vicinity of the Kalahari Desert in Africa. Though anatomically identical to us, the tools used by those early Homo sapiens were the same as those used by the hominids who preceded them. They showed no particular abilities for abstract thought or symbolic representation at the start.

But then, a bit before 100,000 years ago, something happened. Suddenly there were stenciled pictures of hands on the walls of caves and cliffs, hand axes tied to sticks, pictures and carvings of animals—and even of an occasional human—and hints about some sort of spirituality. Intelligence is separate from consciousness. Our history suddenly became more and more independent from biology as Sapiens created technology and culture and began to modify and manipulate the environment, rather than simply adapting to it.

Then, about 10,000 years ago, our species invented agriculture. Despite a less balanced diet, this meant that much larger groups of people could be fed and stay in one place. Civilizations, governments, and empires were born.  To support and bind large groups together, Homo sapiens invented writing, mathematics, gods, religions, cultures, values, money, nations, cooperation, and order. All the way up to and through the medieval period, social arrangements and culture were considered set and unchangeable, dictated by religion and authority. Science described but did not believe it could improve. Thinking focused on the past.

A sea-change came in the 18th century. Notions that we are simply actors in a divine drama began to erode. The idea of progress was born, along with increased belief in free will and that “I can make life better.” Individual rights, rather than simple collective conformity, were asserted. The aims of education began to shift to make one think rather than just conform. Science no longer simply described; it also attempted to make life better. The aspirations of capitalism were ostensibly to create wealth and prosperity for all.

But in the 21st century, these values and assumptions are now under threat— victims of “Dataism.”  “Non-conscious” algorithms, and the gathering and application of mega-data about our collective and individual behaviors and choices, enables self-learning systems and technologies to anticipate our choices and actions, whether it be for a purchase, or how we vote. They can now be determined collectively. Free will may be an illusion after all. There is the additional hazard that many individuals will see their economic usefulness called into question, though the value of some with high talents is likely to increase. The divide between the haves and have-nots may well widen.

In response to a question about whether there is a way out of all this, our speaker responded that IBM’s super-computer Watson had beaten the world champion of the game “Go” (a sort of three-dimensional chess) four out of five times. When asked how he won that one game, the human champion said “by moving irrationally.” Since the computer learned the best moves in the game through repetitive examination of thousands of past winning strategies, it couldn’t deal with irrationality—a skill, thankfully, which members of Homo sapiens possess in abundance.