Investigative Journalism in the Trump Era 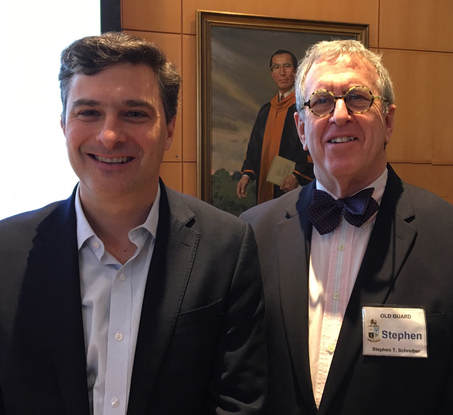 Minutes of the 12th Meeting of the 77th Year

Julia Coale, President, gaveled the meeting to order promptly at 10:15 a.m. on December 5, 2018, before an overflow audience in the Convocation Room of the Friend Center on the campus of Princeton University. (I did not research all 77 years of Old Guard records, but it is believed that the 172 members and guests in attendance set a new record for Old Guard meeting attendance). Following the invocation, led by Joan Fleming, President Coale promised that more chairs would be brought in (as indeed they were) and proceeded with thanks to Tony Glockler and the Hospitality Committee for the morning treats before the day’s program. Next, she introduced David Wetherill, who read the minutes of the previous meeting. There were numerous guests, too many to be individually introduced, and she asked that they stand and be welcomed with applause. She then asked for a moment of silence to recognize the passing of member Rosemary O’Brien and to acknowledge as well the passing of George H. W. Bush, the 41st President of the United States, whose funeral was being conducted in Washington, DC, that morning at the time of our meeting.

Stephen Schreiber introduced the speaker, Mark Mazzetti, Washington investigative correspondent for The New York Times. He thanked our speaker for taking a very early train from Washington that morning to make the meeting and pointed out that he was returning to Washington on the 12:45 p.m. train from Trenton, immediately after the meeting. The members applauded this revelation as an extra thank you to the speaker. Mr. Mazzetti, the son of Old Guard member Joe Mazzetti, graduated with a BA in political science from Duke University and did a post graduate year in history at Oxford. He initially worked for The Economist, then U.S. News and World Report followed by a stint at The Los Angeles Times. In 2009, he shared a Pulitzer Prize for reporting on the intensifying violence in Pakistan and Afghanistan and Washington’s response. He is the author of The Way of the Knife, a factual account of the post 9/11 period with the CIA conducting wars and clandestine killings in Iraq and Afghanistan and in the shadows.

Mazzetti opened by stating that he had moved to Washington in the summer of 2001 with an assignment to cover the Pentagon. He confessed that at the time he knew very little about the U.S. military. A month later, the 9/11 attack occurred, which provided an immersion course in reporting with no time for practice. He also clarified with due modesty that the Pulitzer he had won in 2009 was with a team of reporters and that it was shared that year with a team also from the Washington Post.

The speaker described the election of Donald J. Trump as an event that hit the editorial department of the New York Times “like a freight train.” He described how, immediately after the election, the editorial staff convened to try to understand what they had gotten right, what they had wrong, where they should immediately focus and what challenges were to come. Providing personal background color on covering the new President at this time, he described playing with his young sons in the basement of his Washington home before school only to learn that the President had tweeted about a story that Mazzetti had written in that day’s Times. Not only do the President’s tweets take aim at the press in general but equally can be aimed directly at individual reporters. As he described, “And thus began a very stressful day.”

The Trump presidency demanded a new set of rules of engagement for reporters. When the foreign policy establishment announced that they would not work with the new president, reporters looked around and questioned how the new administration might staff the many foreign policy positions. The answer, of course, was the “B” team, many of whom are under indictment or in jail today.

Fortuitously, during the transition time, the Russia story broke and the New York Times elected to run the story of the FBI investigation on the front page on inauguration day, January 20, 2017, much to the displeasure of President Trump. Mazzetti described the complexity of chasing down numerous leads, some of which resulted in stories and many of which proved to be blind alleys. He explained that when you don’t know where a story is really going, it is very difficult to know how to allocate resources, principally the time of the reporter team. He described managing this when all the time the president is saying that the reports are “fake news” and the fake news moniker is picked up by members of Congress and by various talking heads from Trump-friendly media.

This reporting nightmare, he said, gave rise very quickly to new rules of journalism: Mazzetti described the now two-year-old Russian investigation as having begun early on with information that a neophyte foreign policy advisor to the Trump campaign, George Papadopoulos, was a “subject of interest” to the FBI. For seven months, the New York Times’s team did not know why. It was only when Special Prosecutor Robert Mueller indicted Trump campaign chairman Paul Manafort, that the role of Papadopoulos became clear. A plea agreement was announced at the same time as the Manafort indictment. The New York Times then learned that a Maltese professor, from Russian intelligence, had approached Papadopoulos with “information,” and who then disclosed that fact over gin and tonics in a London bar to an Australian diplomatic attaché, who subsequently called the FBI to report the unusual encounter. As our speaker explained, this effectively closed the blind alley being promoted by President Trump and the White House, which had focused attention on a dossier with information about a previous Trump visit to Moscow that they purported had been arranged and paid for by the Democratic Party.

Mazzetti stated that he did not view the role of the journalist to be adversarial. Rather, he said, it was imperative to be factual and aggressive in looking for the real story. He said reporters cannot and should not be “the opposition party.” He credited a Washington Post editor with the expression: “We are not at war; we are at work.”

But, our speaker emphasized, journalists cannot just go on with business as usual.  He said, “We don’t want the abnormal to become normal,” and said that with Trump in the White House, reporters must avoid becoming numb to what is going on. He explained that there is no precedent for a president attacking the judiciary, the justice system, the FBI, the CIA and the law and order establishment as is now being done. He explained that it all is aimed at discrediting the Mueller investigation and that, unfortunately, the attacks from the “bully pulpit” and the “Twitter pulpit” do have an impact.

Mazzetti ended with a rhetorical question about when it might all be wrapped up. His view is that the Mueller report will come soon, but explained that will only start a process of congressional investigation, possible impeachment in the House, leading to a trial in the Senate. If the trial in the Senate finds the president innocent, it will only serve to strengthen the Trump hand in the 2020 election, enabling the Trump forces to denounce the entire investigation as “a witch hunt and fake news.” Of course, he said, no one really knows what might be contained in the Mueller report.

The speaker ended early in order to afford time for questions and further discussion. One question from the audience focused on the dilemma for the Times to cover so much other news from the rest of the world – Yemen, the environment, etc.– all to be redirected by a 4 a.m. presidential tweet. The speaker explained that this, in truth, is a difficult dilemma for the Times, but that he believed it was lucky to be big and resource-rich enough to cover other important stories. Another questioner wanted to know about leaks and informants today versus that in prior times. Mazzetti said that, of course, there were leaks before, but that, with President Trump’s hostility to the press and with the attorney general saying “We’ll find you and put you in jail,” the atmosphere is definitely different. He said it was way overstated by the president and his team to allege that a “conspiracy of enemies” is behind Washington leaking. He confirmed what has been reported, that there are no leaks coming out of the Mueller team.

Asked to speculate on the lasting impact this episode will have on the future of journalism, Mazzetti said that he personally did not like the use of the term “investigative journalism” as a title. He asserted that, in his view, all reporters are investigative and adversarial and hold subjects to account. He said that the lasting impact hopefully will be an aggressive commitment to journalism in the younger generation of reporters.

Attempting to end the questions on a positive note, he said that there has been an explosion of interest in factual journalism such as is coming from the New York Times and the Washington Post and that subscriptions are up from people looking for truth and facts.