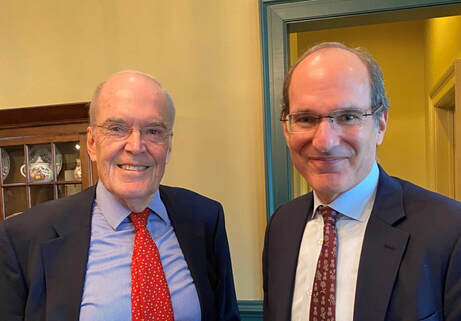 ​Minutes of the 13th Meeting of the 81st Year
President John Cotton called the meeting to order at 10:15 AM. He then led the invocation.

Dr. Cotton next read the minutes of November 30, as Len Berlik, the minute taker, was unable to attend today’s meeting.

Michael Mathews introduced David Nirenberg because Landon (Lanny) Jones had a bad cold and  was unable to attend. Mr. Mathews said that Mr. Jones sent his greetings to the speaker, members, and guests. He added that he had picked up several copies of Dr. Nirenberg’s latest book (written with his father, Professor Ricardo Nirenberg), and that copies would be available for purchase after the lecture.

In 2022, the historian David Nirenberg became the Director and Leon Levy Professor at the Institute for  Advanced Study. Dr. Nirenberg is widely known for his scholarship on the interaction of Christians, Jews, and Muslims in medieval Europe and the Mediterranean region. His research illuminates matters of racism, anti-Semitism, and Christian-Muslim relations.

David Nirenberg was born to immigrant parents from Argentina who eventually settled in Albany, New York. He earned a B.A. (1986) from Yale University and an M.A. (1989) and Ph.D. (1992) in history from Princeton University.

Before beginning his work at the Institute on February 1, 2022, Dr. Nirenberg held several posts at the University of Chicago: founding director of the Neubauer Collegium for Culture and Society; Dean of the Division of the Social Sciences; Deborah R. and Edgar D. Jannotta Distinguished Service Professor; Executive Vice Provost; and Interim Dean of the Divinity School. He has been a visiting fellow at several academic institutions and received numerous prizes and honors. Dr. Nirenberg is a member of the American Academy of Arts and Sciences and the Medieval Academy of America.

His books, which span a number of disciplines, cultures, and historical periods, include the following: Communities of Violence: Persecution of Minorities in the Middle Ages; Anti-Judaism: The Western Tradition; and Neighboring Faiths: Christianity, Islam, and Judaism, Medieval and Modern. He is the coauthor, with his father, Dr. Ricardo Nirenberg, of Uncountable: A Philosophical History of Number and Humanity from Antiquity to the Present (University of Chicago Press, 2021). In Uncountable, father and son explore the powers and limitations of the sciences and the humanities.

Citing Lanny Jones’s notes of introduction, Michael Mathews suggested that one of David  Nirenberg’s fundament goals as teacher, scholar, and administrator has been “to break the norms.” If  that is indeed the case, Dr. Nirenberg seems well-qualified to break a few norms and maybe create a few norms in his scholarship and institutional leadership. While most of his nine predecessors as Director of the Institute for Advanced Study were scientists and/or mathematicians, the first two were  humanists who became educational reformers. Thus—although Dr. Nirenberg is the son of a  mathematician and assured the Old Guard that he holds mathematics in high regard—in his new role, Dr. Nirenberg harkens back to the non-scientist leadership of the first third of the Institute’s nearly 100-year history.

In exploring “Why Collaboration between the Sciences and Humanities Is Difficult – and So  Desperately Needed,” Dr. Nirenberg built much his talk on one of the greatest figures in the history of the Institute as well as in theoretical and applied mathematics: John von Neumann. If anyone in recent history wrestled with the difficulty and necessity of such cross-cultural collaboration, it was  von Neumann, who, in 1931, became the youngest professor at the Institute and remained there until he died at the age of 53 in 1957.

In his relatively short life, von Neumann made discoveries that have impacted people everywhere. He developed new foundations in mathematics. He was instrumental in determining how to build and detonate nuclear bombs. With Princeton University Professor of Economics Oskar Morgenstern, a fellow Austrian, he developed game theory, which today is critical in such endeavors as formulating international political strategy, understanding the behavior of markets, and predicting the evolution of viruses. He was also the chief progenitor of the programmable computer, the very first of which was completed at the Institute in 1951.

As a little boy, he could multiply eight-digit numbers in his head. And on his deathbed, nearly a half century later, he corrected mistakes in ancient Greek being read aloud to him. The cancer that killed him might have resulted from his exposure to radiation from the nuclear bomb testing he witnessed at Los Alamos, New Mexico.

Fascinating as the life of the great polymath is, the two main points Dr. Nirenberg used von Neumann to make are
While von Neumann was helping to develop the atom bomb, he was also formulating game theory with Oskar Morgenstern. They wanted to make human psychology and behavior axiomatic. One step they took to achieve this was to create a “Robinson Crusoe economy,” in which all desire can be reduced to mathematical formulae. One of the most important axioms they formulated depended on assumptions about individual behavior. Examples: (1) every individual wants to maximize the positive outcome he achieves; (2) utility or satisfaction must be quantifiable or rankable; and (3) given any two objects of desire, the individual can always say which she prefers or say she has no  preference.

Math operates by radically simplifying things and then working on the simplified problem. But is a simplified mathematical model sufficient much of the time for complex problems entailing questions of human values? What do we gain by looking at human preferences as transferable, mathematizable, and therefore measurable? And what do we lose?

Dr. Nirenberg said he thinks that von Neumann and Morgenstern forgot a basic point. They posited  that an individual always seeks to obtain a maximum of utility or satisfaction from various desires and needs. But how do we know that the maximization of utility is a general human phenomenon—a law of human nature? They don't give a reason. But the real world is just too complicated for many  of the problems we might chose to investigate mathematically.

As for the assumption that utility or satisfaction must be quantifiable or at least rankable because, otherwise, it could not be maximized, why should we think that desires are quantifiable or rankable—either by human agents or by economists studying those agents? This assumption isn't  forced upon us by our psychology or our experience. It is forced upon us by the requirements of  scientists and economists when they set up and solve a problem.

Returning to Robinson Crusoe: To illuminate the difference between axiomatic versus actual lived experience, Dr. Nirenberg asked, "What is more real to use—the axiomatic Crusoe or the character Crusoe?" He illustrated how Crusoe’s preferences change depending on his circumstances. In the process, the reader of the novel becomes aware of the complexity and mutability of human emotions. The key point: We need to pay attention to the forms of human behavior that are not axiomatic. One ethically complex example: Decisions about which people with kidney failure get a transplant—and which do not—are largely driven by algorithms. Again, what can math tell us clearly about such profound problems and what can it not?

Theoretical approaches to science and mathematics are indeed essential. But they are not sufficient. The only thing that can save us is human values. And human values are not accessible through  science and math but through our endeavors in “the arts and humanities.”

Dr. Nirenberg mentioned J. Robert Oppenheimer, director of the Institute for Advanced Study from 1947 to 1966 (“I’m using his desk from archives,” Dr. Nirenberg noted). Oppenheimer felt that the game theorization of the world had already gone too far. And, today, the datafication of human life is far, far greater than it has ever been. We can now use it to try to decide matters effecting everyone, from individuals to populations. Put another way, we try to deduce deep knowledge of humanity through mathematically and scientifically derived information.

For example, we can use it to create policy around complex and controversial problems. One  example is setting bail in the United States, which, compared to many other nations, has an extremely high proportion of people arrested and incarcerated. We now have machine learning techniques to  look at bail-setting behaviors and see what variables best correspond to actual behavioral outcomes.

Speaking of improving human behavior, people typically won’t change the way they act in ways that cause themselves harm until they have ideas that are terrifying enough. We need myths, stories, and imaginative resources to do this. We need to have these resources in order to motivate people to  change self-harming behavior. Take traffic accidents, cancer, diabetes 2, and Covid-19, for instance. All of these causes of morbidity, mortality, and suffering are best addressed through behavioral change. Put simply, prevention is better than repair. But making this happen depends on reservoirs of  culture, not merely on new technologies.

Can we ever be liberated mathematically from the contradictions and complexities of our lives? No. We need to connect what C. P. Snow famously called the two cultures: science and the arts.

​“I believe,” Dr. Nirenberg concluded “that one of the best places to do that essential work is the Institute for Advanced Study.”