Eye-Wire: A Game to Map the Brain 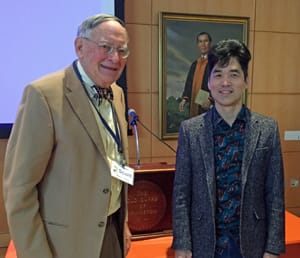 Roland Machold read the minutes of the Dec. 2 meeting.

Attendance was 104; there were no guests.

President Leach announced that the speaker at the next meeting of the Old Guard on December 16 would be Fred Miller, whose talk is entitled “Sentimental Journey – World War II and the Big Bands.”

Scott McVay introduced Professor Seung as an impressive recently arrived – in January 2014 -- addition to the Princeton University faculty who, in addition to his scientific renown, has also been recognized for his communication skills; his TED talk has been viewed more than 850,000 times on the Internet, and his 2012 popular book, “Connectome: How the Brain’s Wiring Makes Us Who We Are,” has become a critical and commercial success.  Professor Seung was also featured in an article in this year’s Jan. 8 issue of The New York Times Magazine.  His exceptional communication skills were clearly on display during his presentation.

Professor Seung’s father was a refugee from North Korea who became a professor of philosophy at the University of Texas.   Professor Seung, growing up in Austin, Texas, showed signs of intellectual precocity by the age of 5.  He attended Harvard as an undergraduate and graduate student, receiving a Ph.D. degree in theoretical physics in 1990.  During his tenure as a professor at M.I.T., his professional interest turned from physics to neuroscience.  He was subsequently recruited by the Neuroscience Institute at Princeton.

Professor Seung began his talk by referring to the command invitation he received -- on three days’ notice -- to attend the April 2, 2013, announcement at the White House by President Obama of a “Brain Initiative,” in which the United States is committing millions of dollars toward progress in understanding the brain, including detailed brain mapping as a major endeavor.

Brain mapping is what Professor Seung and his colleagues do, both at the level of acquiring data and working to develop techniques to make the mapping more efficient, faster and automatic.

The brain is composed of neurons, cells that are specialized to receive signals from the outside world and to send signals back, mostly as commands to move muscles.  In between, there is a tremendous amount of communication among neurons within the brain.  What Professor Seung and his colleagues are aiming toward is to describe completely all the connections in the brain.  The human brain has about 100 billion neurons, each of which sends about ten thousand branches to signal to other neurons.  The contacts of the signaling branches are called synapses.  There are about a thousand trillion synapses in our brains.  What complicates this already daunting task is that each of the thousand trillion functional connections has probabilities of communicating that vary with time!

Professor Seung refers to the collective of all the synaptic connections in a brain as a “connectome,” in analogy with our suite of genes, or “genome.”  As he pointed out, our connectome, which for each person is unique, is a product both of our genes and our experience as well as, to make things even more complex, random factors that insure that the connectomes of even identical twins reared together will not be identical.

It is clear that to begin to understand the brain and the functioning of the connectome, we must know at least two things: 1) What are the brain’s basic components; and 2) What do each of these components do?

Functional information is very important.  There is a small worm, C. elegans, whose entire nervous system consists of about 300 neurons.  Its anatomical connectome – after many years of hard work – is now entirely known.  But, because we are unsure of what many of those neurons actually do, knowing this connectome has so far provided disappointingly little information about the detailed workings of the worm’s nervous system.

The retina is the thin, layered (as Professor Seung remarked, “like a club sandwich”) part of the brain.  Professor Seung selected for analysis the retinal layer containing the cell bodies of the ganglion cells, which are the neurons that send light-related signals from the eye to the visual-analyzing components of the brain.  His basic unit of study is a block of tissue 0.5 mm on a side, which contains the cell bodies of 348 ganglion cells.

In order to study the processes and the synapses of those neurons, one must take advantage of the high resolution available through electron microscopy.  Light microscopes in general do not have sufficiently high resolving power to carry out such tasks.  But to analyze even a tiny block of brain tissue in complete detail at the level resolvable in the electron microscope is a formidable task.  To aid in this analysis, Professor Seung has designed an elaborate computer game called “Eye-Wire,” available to all on the Internet to enlist people worldwide to contribute to this analysis.

He has  posted the serial electron micrographs from his block of tissue on the Internet and has challenged viewers to trace out the processes (mostly dendrites) from individual cells from section to section toward totally reconstructing (along with the aid of sophisticated computer programs) all the dendritic ramifications (i.e., dendritic “trees”) of the individual ganglion cells.  Thus far, this analysis of the 348 retinal ganglion cells has suggested that there are at least 40 distinct morphological ganglion cell types.  It remains to be seen how those 40 morphological types correspond to distinct functional entities.

Professor Seung concluded the formal part of his talk by reading the first three paragraphs from the introduction to his book, “Connectome,” the last sentence of which states that “The mission of neuroscience is to explore [the] enchanted branches [of the brain’s neurons] – to tame the jungle of the mind.”

A very lively question-and-answer period followed, during which Professor Seung responded to more than a dozen excellent inquiries from Old Guard members.