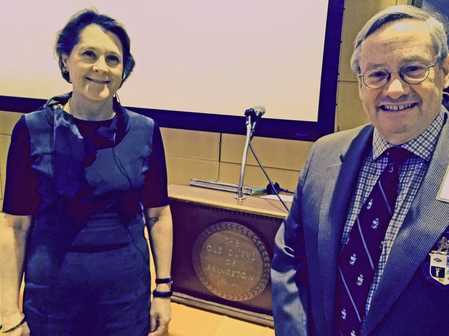 Susan P. Schoelwer, Speaker, and Owen Leach, Introducer
Minutes of the 19th meeting of the 74th Year
The 19th meeting of the 74th year of the Old Guard was called to order at 10:15 a.m. by President Owen Leach.  Arthur Eschenlauer led us in the invocation and Patricia Taylor read the minutes of the February 3 meeting. Bill Schoelwer introduced his guests: his wife, his son and his daughter-in-law, the speaker for today. There were 75 members in attendance.

President Leach introduced the speaker, Dr. Susan P. Schoelwer, who was appointed Robert H. Smith Senior Curator at George Washington’s Mount Vernon in 2014, having been a curator there since 2010.  She has a doctorate from Yale University, a master’s degree from the University of Delaware’s Winterthur Program and a B.A. from Notre Dame University and is the editor of a new book “The General in the Garden: George Washington’s Landscape at Mount Vernon.”

Her talk was entitled “George Washington’s Retirement: Clever Trees, Fancy Pictures and a New Republic.”
She began her talk with illustrations from George Washington’s connection to the Princeton area, showing the famous picture of George Washington Crossing the Delaware in 1776, a view of Rockingham in 1783, where George Washington stayed while waiting for word of the peace treaty ending the Revolutionary War.  Upon the conclusion of the war, Washington prepared for retirement and a return to private domestic life at Mount Vernon.  He resigned his commission on Dec. 23, 1783, and arrived at Mount Vernon the next day in time for dinner.

His retirement lasted only five years. In April 1789, he received word of his unanimous election as president. Those five years were critical to the creation of Mount Vernon as we know it today as well as his concern for developing a strong central government seeking to combine the states into a single federal republic.

At Mount Vernon he began raising a second family, the grandchildren of Martha, enlarged his library, had an active network of correspondence and changed his opinion on the morality of slavery. Also, he began an ambitious plan to open the Potomac to inland navigation by establishing the Potomac Company.

In 1785 he undertook a major overhaul of Mount Vernon’s grounds by introducing naturalistic landscape design to the property and acquiring new agricultural methods and crops. His new landscape plan replaced the straight central driveway with a broad flattened expanse of ground – a bowling green – planted with lawn grass and bordered by gently curving paths that meandered through groves of trees. In addition to native specimens that he marked in the woodlands between his five cultivated farms, he requested seeds and seedlings from friends and relations throughout the United States -- evergreen magnolias and live oaks from the south; Balm (of Gilead) trees, white and spruce pines, hemlocks from the north and “any other seeds of trees which are not common in this climate [that is, Virginia].”

Just before the war, George Washington had begun adding onto the mansion. At the south end, a private wing had been completed, with a spacious new bedchamber for him and Martha on the second floor and a study for him on the ground floor.  A single large room with a Palladian window was added to the north end of the house, and from an English friend, Samuel Vaughn, he received a gift of a mantelpiece carved with pastoral scenes. The ceiling and walls of this new room have elegant motifs typically seen on Adamesque ceilings in Britain.

Many of the repairs to the house had to be completed in Washington’s absence as he spent the spring and summer of 1787 presiding over the Constitutional Convention in Philadelphia. But he found time to continue his interest in horticulture by visiting Bartram’s Garden outside Philadelphia.  Also, while in Philadelphia, he ordered the weather vane for the top of Mount Vernon’s cupola. It consists of a bird with spread wings and an olive branch in its mouth, a traditional symbol of peace. It illustrates to all visitors to the mansion a vivid expression of Washington’s hope for a new nation.

Fortuitously, in August 1787, Washington’s old friend, Samuel Vaughn, paid a visit to Mount Vernon and created a detailed record of the landscape’s design just as it neared completion. Key features are remarkably close to patterns still visible on the landscape today such as intersecting lanes with neat, symmetrically arranged outbuildings, creating the illusion of a compact, tidy village. (In reality, those work areas were anything but tidy, as Mount Vernon’s enslaved workers carried out the messy, smelly tasks needed to support the plantation – blacksmithing, smoking meat, doing laundry, mucking out horse stalls.) Groves of trees at either end of the mansion served to shield the view of the outbuildings from the home.
​
Vaughan showed two walled gardens, each divided into six large beds, a greenhouse set into the north side of the upper garden, with two long wings that were added in 1792.

After George Washington’s death in 1799, Mount Vernon passed through three generations of his heirs until being purchased in 1860 by the Mount Vernon Ladies Association. Since that time the association’s goal has been to preserve and present the estate as nearly as possible as it appeared in Washington’s lifetime.
In 2010 the southern half of the upper garden, with its small beds and many paths, were bulldozed to clear the way for it to be replanted following Washington’s original design. Following 18th century garden practice, large expanses of vegetables occupy the center of each bed, surrounded by borders of ornamental shrubs and flowers and a perimeter edging of boxwood, trimmed to just a few inches in height.

Inside the mansion, over the course of 15 months in 2013 and 2014, more than 100 specialists contributed their knowledge and skills to the most extensive single room renovation project in the 150 years of the Mount Vernon Women’s Association. One of the biggest changes centers on the interpretation of the large dining room. Today visitors see a grand 18th century style saloon which Washington proudly called his “New Room” fitted out as a picture gallery and formal reception space. The 2014 reinstallation of the New Room strives to reclaim all of its 18th century identity by highlighting the architectural form and ornaments, the symmetry and its multipurpose character. The new installation also showcases the room’s function as a picture gallery enhanced by marvelous north light from the Palladian window.

Following the lecture there was a lively question and answer session.