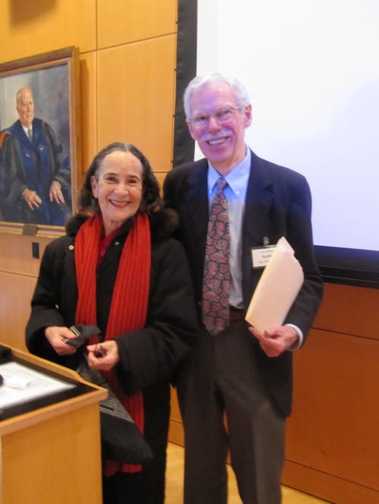 Professor Neta Bachall, Speaker and Glen Cullen introducer
Minutes of the 18th Meeting of the 73rd Year
The meeting was called to order by the President, Owen Leach, at 10:15 AM.

The invocation was intoned by Charles Rojer. The attendance was 82.

The Minutes of the last meeting were read by John Frederick.

Glen Cullen introduced the speaker who is Professor Neta Bachall, The Eugene Higgins Professor of Astrophysics at Princeton University. The subject of the talk was “Advances in Astrophysics.”

The professor stated that there been exponential growth in knowledge and understanding of the Universe in the last 25 years since the Hubbell Telescope was placed in orbit around the earth. In fact she and her husband had been in the project planning for the Hubble.

The professor said that she wished to talk about 3 areas of interest in cosmology: Exoplanets, Dark Matter and Dark Energy.

Firstly Exoplanets: these are planets like the Earth and Mars, orbiting stars other than the sun. Since there are 100 billion stars in the Milky Way, our own galaxy, and 100 billion galaxies in the universe, there must be a large number of exoplanets. Thus far we have identified about 1,000 using the Hubble and the Kepler telescopes both of which are in orbit around the Earth. Exoplanets are identified by detecting the wobble in their parent stars due to gravitational pull or by measuring the minute decrease in luminosity as the planet transits between the star and earth – the eclipse like effect. In some cases we can even detect the atmosphere of the planet as it crosses the rim of the star by looking at the spectrum of starlight filtered through the planet’s atmosphere. If we find carbon, oxygen and other elements similar to those in our own planet, could there be life there? That is an interesting question.

The mass of this dark matter is estimated to be about 25% of the total mass in the universe.
​
Thirdly Dark Energy: Measurements of the red shift in spectral lines in the light from distant galaxies show that the universe is expanding at an ever increasing rate. Calculations show that this cannot be explained by the gravitational effects of the known mass and the dark matter in the universe and so an additional energy form has been postulated called dark energy which represents 70% of the mass in the universe. We do not know the structure or composition of this energy. We know that its density is much less than that of ordinary matter or dark matter. It may be a fluid which pervades all space or it may be some quantum mechanical effect in the vacuum of space. A third possibility is that we will have to modify Einstein’s gravitational theory. We hope it does not come to this.