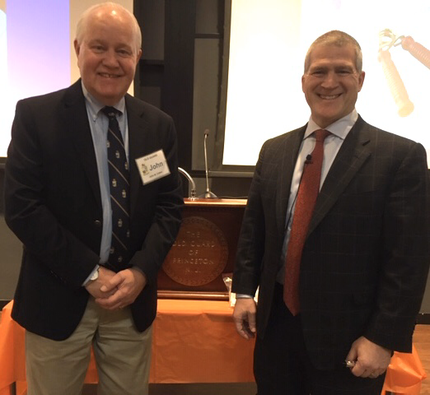 Minutes of the 19th Meeting of the 78th Year

The  speaker, introduced by John Cotton, was Mark McLaughlin, a neurosurgeon, an author, a thought leader in performance enhancement, a national media commentator, a motivational speaker, and founder and coach of Trenton Youth Wrestling. His talk was entitled “Cognitive Dominance: A Brain Surgeon’s Quest to Out-Think Fear.”

We don’t have time! It’s a dramatic life or death situation. A neurosurgical emergency with only moments to spare. Leaping over logistical hurdles and administrative roadblocks the neurosurgeon rushes the patient to the operating room… and a life is saved. “Never underestimate the aggressiveness of a neurosurgeon,” Dr. McLaughlin said.

Dr. McLaughlin used such neurosurgical experiences to illustrate the vital importance of the concept of cognitive dominance, which he defined as enhanced situational awareness that facilitates rapid action under stressful conditions. It generates peak performance, when critical decision-making is called for, and can be applied in all walks of life.

Fear is a universal emotion, and he dramatically announced that he would call upon a random audience member to stand and extemporaneously speak on a topic that he would specify. ”No use looking away from me,” he said, as he advanced threateningly into the audience, generating sweaty palms among us all. “You’ve just felt that emotion,” he said, as he stepped back to resume his talk.

Surgeons don’t like to talk about fear and grief. In the operating room such feelings can be due to the anticipation of failure. On 2000 occasions he has had to give families bad news about their loved ones. Cognitive dominance is necessary to overcome the attendant emotions.
​
But how do we achieve cognitive dominance? This is a skill acquired using three fundamental elements: lifelong learning, consilience, and building platforms.

For the first element, lifelong learning, Malcolm Gladwell suggested that 10,000 hours of training was necessary to maximize a skill, but for a neurosurgeon it’s not that easy. McLaughlin logged 40,000 hours of residency training and hundreds of thousand hours in the operating room, making 30,000 critical decisions that would change a patient’s life forever.

The second element, consilience, is E.O. Wilson’s term for uniting the sciences and the humanities. Thinkers from Descartes, to Darwin, Jung and Einstein illustrate the benefits of searching outside the constraints of orthodoxy. As a philosophy major in college, McLaughlin realized that marrying philosophy with science would make him a better doctor. This led him to recognize that fear has both objective and subjective elements that can be plotted on a graph with Cartesian coordinates. When both objective and subjective elements appear in the positive sector, cognitive dominance over fear is assured. In contrast when those elements are negative, fear inhibits performance. The objective is to always move towards that positive/positive quadrant.

The final element of the triad is platform building, a metaphor that generates a mindset that can conquer fear and establish a secure basis for opinions and actions. He used stacks of actual gym platforms, each labeled with a necessary attribute such as courage, loyalty, faith, and humility to illustrate how an ever-higher level is reached and a more objective view is obtained.

Finally, Dr. McLaughlin described how before every operation he reminds himself of his five Ps: pause, patient, plan, positive thought, and prayer. This generates a faith that gives pep to his step and quiets neural chatter.

Faith also allows forgiveness when things go wrong. He had worried for twenty years about a patient who had survived a perfect operation but became mentally compromised due to postoperative complications. Later he discovered that the family was grateful to have their child despite his impaired state, and Doctor McLaughlin knew then that he could forgive himself. He ended with “I hope,” he said, “that this talk has been transformational to you so that you can steer toward cognitive dominance.”
​
Respectfully submitted,
Roger Moseley